Zac Whipsnake is a pre-made young adult male Sim who is 18 days away from becoming an adult and lives in Appaloosa Plains with his roommates. He has 4 Riding skill points (despite not having a Horse) and 1 skill point in Cooking. He is also doing poorly at his job and needs to improve and gain 3 more cooking points in order to be promoted.

As his biography states, Zac is often mistaken for a mean-spirited man because of his gruff appearance and rebel attitude, but in truth, he is only over-emotional and all he wants to do is become a celebrated chef. He also has the Pyromaniac hidden trait, which can allow the player to make Zac set something on fire, which he can easily put out because of his Daredevil trait.

He is friends with Kenji Midden and Johnny Johnson, good friends with Chuck Hobble, dislikes Benni Hennessey and enemies with Hailey Shepherd and Juanita Blanco. 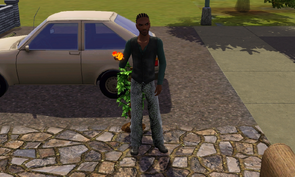 Zac's hidden trait.
Add an image to this gallery
Retrieved from "https://sims.fandom.com/wiki/Zac_Whipsnake?oldid=889150"
Community content is available under CC-BY-SA unless otherwise noted.