Yolanda Shaw is a pre-made Sim, living alone in a large house in the downloadable neighborhood of Lucky Palms. She wears a short dress which came from Lucky Palms, the town she resides in. Her bio implies that she is a flirty Sim who likes bright colors and short skirts. She doesn't mean to flirt with all the boys but it just seems to happen. At the start of the game, Yolanda is expecting a baby, whose father is her ex-boyfriend Lennon Sosa.

She is currently employed in the Music career as a Roadie. Her bio also states that she has a phobia with commitment, which may imply why she has many ex-boyfriends. She lacks the Commitment Issues trait, however. She is well into her lifetime wish of being a heartbreaker; being the ex-girlfriend of Jaycen Hendrix, Richard Irwin, Brayden King, and Lennon Sosa. 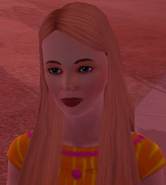 Add an image to this gallery
Retrieved from "https://sims.fandom.com/wiki/Yolanda_Shaw?oldid=921015"
Community content is available under CC-BY-SA unless otherwise noted.