The Sims Wiki
Register
Don't have an account?
Sign In
Advertisement
in: Interactions with self, The Sims 2, Spa Day
English 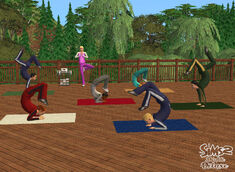 Sims performing Yoga in The Sims 2

Yoga is a fitness-building activity, that Sims can perform in The Sims 2 and The Sims 4: Spa Day.

Sims who have three or more body skill points can perform the "Do Yoga" self-interaction. Yoga builds the Sims' fitness and body skill. There is also a related secret yoga skill, that gets improved alongside the body skill, regardless if the Sims perform yoga or any other activity that builds the body skill. Sims with higher body skill perform more advanced yoga positions, and are less likely to lose their balance and fall over, which will cause them to stop. If a Sim is doing yoga, other Sims can join, regardless of their body skill.

A visibly pregnant Sim cannot perform the "Do Yoga" self-interaction, but can join a Sim who is doing yoga.

Unlike many activities that build body skill, yoga does not cause a fast drop in the Hygiene meter. Also, if Seasons is installed, yoga does not raise a Sim's temperature. If FreeTime is installed, yoga builds enthusiasm for the Fitness hobby. Yoga uses similar poses used in the Meditation interaction, but adds other, and more advanced poses, such as the Scorpion pose and advanced variations of the Handstand pose, such as One Handed Tree pose or One Handed Handstand and the Handstand Scorpion pose.

Performing yoga builds the wellness skill for a Sim who's teen or older, and it builds the mental skill and the motor skill for child Sims. Yoga is performed using a yoga mat and can also be learned from a yoga instructor.[1] If Sims practice yoga often enough, they will become fit and muscled. To train the wellness skill without making a Sim muscled, try using massage or meditation.

The yoga mat has options to do a yoga routine, practice yoga, and do individual poses. Practising yoga and doing poses only boost fitness and the wellness skill, but yoga routines give different moodlets.

Doing the routines gives a +1 moodlet based on the routine that was chosen. There is also a chance to get a confident moodlet, because the Sim is getting fitter by performing many yoga poses. Doing the mind concentrating routine will make the Sim focused, which allows them to build the wellness skill faster. These are the three routines: