Xander Clavell is a pre-made young adult Sim living in Sunset Valley with his elderly parents. He is a party animal, but he is really Hot-Headed and Inappropriate - making him very difficult to get along with. More than that, he is a moocher, and his father wants him out. He is the son of Buster and Bessie, and the grandson of Ransom and Jennie Clavell.

Xander has issues with commitment and he does not want to move out or get married. He is friends with the flirty Tamara Donner and is employed in the criminal career at level 1 but he has no athletic skill. Sometimes by the story progression he will begin a romantic relationship with Tamara Donner or Blair Wainwright, and they may end in marriage. Xander is acquainted with Hart family, Beau Andrews, Claire Ursine, (his boss) and is disgusted by Victoria Andrews. He has a few days left until growing up into an adult.

The first time a household (besides the Clavell's) is played, Xander often makes a visit. 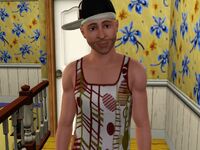 Xander's outfits
Add an image to this gallery
Retrieved from "https://sims.fandom.com/wiki/Xander_Clavell?oldid=902350"
Community content is available under CC-BY-SA unless otherwise noted.