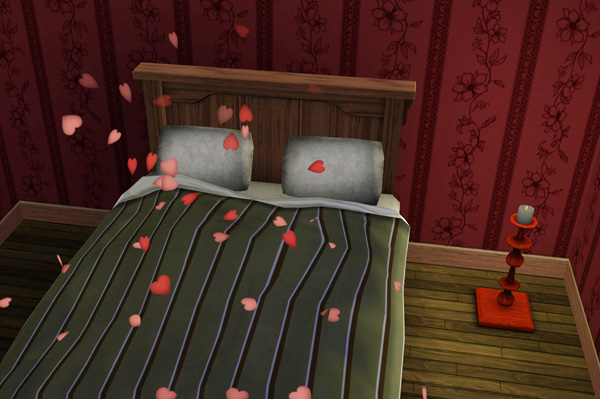 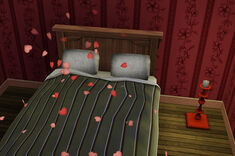 WooHoo is used in The Sims 2 and The Sims 3 as a euphemism for sexual intercourse. If cinematics are enabled in The Sims 2, then there will be a comic animation involving fireworks the first time a Sim woohoos with another.

In The Sims 2, Sims remember their first WooHoo, and also remember all the Sims they WooHoo with, but this is also exceptionally likely to lead to jealousy in relationships.

WooHoo interactions can be carried out between two Sims, regardless of gender, that have a very high relationship score. In The Sims 3, Sims don't need to have such a high relationship score in order to be able to WooHoo. During conversation, the other Sim must find them "Extremely Irresistible" in order for the options of WooHoo and/or Try for Baby to appear [TS3].

Play in Bed was present in The Sims: Livin' Large, as a precursor of WooHoo. Sims could also "play" in the two-person hot tubs from Hot Date and Vacation.

Having WooHoo will fully boost the Social and Fun bars (even if testingcheatsenabled is being used to slide the bars down) of both Sims. In The Sims 3, it will often lead to an 8 hour "Having a Blast!" moodlet for both Sims.

While Sims can WooHoo without trying for a baby, and without risk of pregnancy, the "Try for Baby" action is also WooHoo. In The Sims 2, trying for a baby will fulfill the want to WooHoo. If it's also one Sim's "first time" with the other, that Sim will get a memory of having had WooHoo.

The WooHoo interaction is possible in several locations:

In The Sims 3: World Adventures, after you have installed it and updated it, after a WooHoo, the two Sims will crawl out of the bed, think of each other, and pump their fists in the air while saying "Woo!". This means they had a fun time during the WooHoo.

In The Sims 3, there have been accounts of "Friends with Benefits", where two Sims could woohoo without becoming a love interest. In The Sims 3, it is possible to have "Friends with Benefits" without World Adventures. The two Sims would need to be good friends, and then tour a building mentioned above together. The option to WooHoo appears without them being love interests, though they will not have the same reaction as they do in World Adventures.[citation needed]

If The Sims 3: Generations is installed, after a WooHoo between two Sims, either Sim may do a fancy walk, similar to how an Imaginary Friend walks. This happens when a Sim woohoos on a community lot or another Sims' house.

In Showtime, doing WooHoo inside a photo booth will consider Sims to be WooHooing in the public and gives them "Public WooHoo" moodlet, even if it's done at home.

If the lot already has 8 controllable Sims on it, the "Try for baby" option will not appear. Zombies, Mummies, Servos, and SimBots do not have the "Try for baby" interaction. Without hacks or mods, only male/female couples can try for a baby. A male between the ages of Young Adult and Elder can impregnate a female.

Without cheats, male Sims can only be impregnated by aliens[TS2]. This can occur if they "Stargaze" with the more expensive telescope at night, though it is very unlikely to happen. However, if FreeTime or later is installed, any Sim who has Knowledge as their primary aspiration, and who has enough Lifetime Aspiration points, can choose Summon aliens as an aspiration benefit. A Sim with this benefit can use any telescope to attempt to summon aliens, and will have a higher chance of being abducted. Therefore, an adult male Sim with this benefit can, more or less, try for an alien-hybrid baby.

As with all other romantic interactions, blood relatives, and Sims age teen and younger are automatically prevented from WooHooing (although there are hacks that allow both groups to do this, with the exception of Sims younger than teen). Furthermore, because of its wide-ranging implications, WooHoo is never autonomous, except through the use of a hack known as Autonomous Casual Romance, which can be found on Simbology. unzip 1 unzip 2.

Also, another mod on Simbology allows same-sex couples to Try For Baby; the Sim that initiates the action will be considered the "father."

Pets can WooHoo in order to breed (producing a litter of up to 4 puppies or kittens), but they require a Sim that has a good relationship with at least one of the pets to direct them, and the pets must obviously must have a good relationship. The gestation period is approx. 72 game hours, just like Sims. If pets have a bad relationship with the other pet, they will refuse the action and go off on their own for a bit sometimes.

View past articles · Vote on future Featured Articles · Other Featured Content
Retrieved from "https://sims.fandom.com/wiki/WooHoo?oldid=490029"
Community content is available under CC-BY-SA unless otherwise noted.