Not to be confused with Wolff family (Sugar Maple Coast).

The Wolff family is a pre-created, playable family that appears in The Sims 3 and lives in Lone Wolff Manor, Sunset Valley. It consists of Thornton Wolff and his wife Morgana Wolff. While Morgana has the Family-Oriented and Artistic traits, Thornton has Dislikes Children and Can't Stand Art traits. They were not aware of their differences when they got married, and it has caused a problem in their relationship, because they have completely opposite wishes and goals.

The reason that Thornton dislikes children is because of the relationship he had with his parents, with whom he never got along. It's also implied that Thornton married Morgana because he had to, not because he's in love with her. This scenario is similar to the Crosby family and Andrews family.

A large part of the Wolff family re-appears in Moonlight Falls as actual werewolfs. Although the exact relationship between the two is unknown, it is confirmed that the two are related.

Another Wolff family appears in Sugar Maple Coast, the console version of The Sims 3: Pets.

Wolff: from wolf, carnivorous mammals that typically live and hunt in hierarchical packs and prey on livestock and game animals. One that is regarded as predatory, rapacious, and fierce.
Morgana Wolff: a "circling sea or great brightness; bright or white sea dweller".
Thornton Wolff: U.S. architect, born in the British Virgin Islands.
Pappy: slang for "father/dad"
Dwayne: "dark, black". Refers to the black T-shirt he wears with most of his outfits.
Erica: "eternal ruler"; also derived from Ericaceae, a family of plants including heather and some berry bushes, such as blueberry and cranberry. Refers to the effort she puts into disciplining her family, her love for the color lilac (some species of heather have lilac flowers) and her favorite food, fruit parfait, which is often made with berries.
Waylon: "land by the road". Also derived from the Ancient English name Wieland, from the Germanic words wela (ability) and land (land). In Germanic mythology, Wieland was an unparallelled blacksmith and craftsman. Refers to his talent with new technology and his status as the family's black sheep. Furthermore, his full name is a pun on the expression "lone wolf".
Wilhemina: "desire to protect". Refers to her character bio, that suggests that her curiosity could make her a great detective when she is an adult.
Gator: diminutive of "alligator". Refers to him being hard to handle. 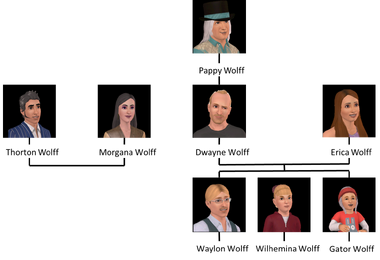 Add an image to this gallery
Retrieved from "https://sims.fandom.com/wiki/Wolff_family?oldid=841105"
Community content is available under CC-BY-SA unless otherwise noted.