The Sims Wiki
Register
Don't have an account?
Sign In
Advertisement
in: Animals, Types of NPCs, Pets (The Sims 2)
English 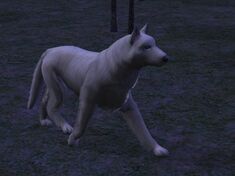 Wolves were introduced in The Sims 2: Pets, where they are animal NPCs. Wolves look like a breed of large dog,[1] and have unique fur. Wolves have three kinds of coats; black, white or creme with a gray back. Wolves sometimes appear as strays, and can be interacted with like other strays. Knowledge Sims will often have wants to see a wolf.[2] A werewolf has the ability to summon wolves.

Wolves can be adopted, similarly to stray dogs and cats. However, they are much more difficult to befriend. They require a higher relationship to be adopted, develop Master relationship (85 Lifetime), and develop pack Relationship (65 Lifetime). Unlike stray dogs, wolves can dig holes, eat flowers, roll in flowerbeds, or knock over the trash without being greeted. There is a chance that pets will run away after losing a fight against a wolf.

Adopted wolves often howl at night and awake sleeping Sims. Wolves can be bred with dogs, and the puppies may bear a greater resemblance to one of the parents or have a mixed appearance. Puppies born to wolves in the game are treated by the game as large dogs, even if both parents are wolves.

The Pack leader is a special kind of wolf, which can transform Sims into werewolves.