Wogan Hemlock is a vampire that lives in Bridgeport with his family. He is married to Morrigan Hemlock and had a daughter with her: Belisama. All three are vampires, though he is the only one who is not Evil—thus making him one of the few vampires that do not possess the Evil trait.

He works as a Thug in the Criminal career track. Initially, he has 2 skill points in Athletic skill, though his career requires him to improve it to level 6. He also has 4 skill points in Bass.

He is enemies with his townie sister Brigit, William Fangmann and Elvira Slayer, best friends with Jessica Talon and good friends with Beau Merrick. He has tan skin as human and pale as vampire. He wears makeup and also has a very muscular body.

Wogan sleeping on a Vampire Altar. 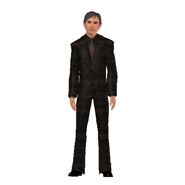 Wogan's everyday clothing
Add an image to this gallery
Retrieved from "https://sims.fandom.com/wiki/Wogan_Hemlock?oldid=903519"
Community content is available under CC-BY-SA unless otherwise noted.