The Sims Wiki
Register
Don't have an account?
Sign In
Advertisement
in: The Sims Medieval, Hero characters 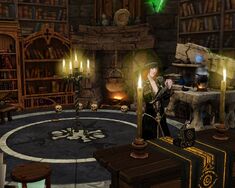 Not to be confused with Witch or Spellcaster.

The Wizard is a hero character in The Sims Medieval. The wizard can learn and cast magic spells and study new ones as part of their daily occupation. A wizard also needs to gather plants and herbs to create potions to fulfil their professional responsibilities. Wizards have a crafting station in their tower which contains a magical tome from which they study their spells, a station to brew their potions, and a Crystal Ball through which they can scry. The wizard can be male or female and is an ally of the Kingdom as opposed to the Witch, who is the villain of a certain quest. As shown in The Sims Medieval Townhall Event, a wizard is powerful enough to kill a Monarch with a spell.

Instead of sleeping, wizards can Meditate, so their energy is refilled. This can be done anywhere, not necessarily in the Wizard's Tower. They tend to Meditate in random places when left to their own devices.

A wizard killing a witch.

Icon for Wizards
Community content is available under CC-BY-SA unless otherwise noted.
Advertisement