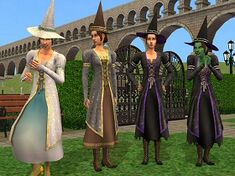 From left to right, the Infallibly Good witch to the Atrociously Evil witch.

Not to be confused with Wizard.

A Witch or a warlock, the male counterpart, is the life state added in The Sims 2: Apartment Life. In terms of functions, gameplay and features, witches are one of the biggest and most complicated life states in the game.

To become a witch/wizard in The Sims: Makin' Magic, an adult Sim can open the box from the Mystery Man and get the magic wand. The box also contains some basic ingredients and a few MagiCoins. When the box is opened, A Hole in the Ground, a spellbook, and a wand-charger will appear. (These items can also be bought in Buy Mode.) The wand-charger also dispenses wands; an adult Sim who didn't get one from the Mystery Man's box can get one from a wand charger. A child can get a child's wand from the NeoMagical Newt, which must be bought in Buy Mode. A Sim can give up being a witch/wizard by going to Magic Town and selling their wand to the Mystery Man.

In Makin' Magic, there are no special terms such as "witch", for magical Sims, and being magical is not considered a life state.

To become a witch in The Sims 2, a Sim (teen, adult or elder) must find one, and befriend him or her. Once done so, a new interaction appears: "Teach Me the Ways of the Light" (if the befriended witch is good) or "Teach Me the Path of Darkness" (if the befriended witch is evil). Once done, the Sim will become either a good or evil witch, depending on the type of witch they befriended, and will have an extended name including their alignment, for example, "Bella Goth the Good witch". They will also receive a robe, hat, cauldron and spell book. Their colors will be determined by the witch they were received from. The new witch may then purchase goods from other witches, including reagents (see below), as well as a new cauldron or spell book.

While witches and warlocks receive distinctive clothing, they can change into normal clothing and headgear which has no effect on their magical abilities.

There are also several ways to use hacks to become a witch/warlock. One of them is to enter the cheat "boolprop testingcheatsenabled true" (Press CTRL+Shift+C to make a little box show up. Enter cheats here). Then press shift and click a witch and press "MAKE SELECTABLE". When the player is controlling the witch, click on a Sim and cast the spell "Magus Mutatio". The Sim is now a witch.

Shift-clicking on the mail box with testingcheatsenabled on and selecting "Make NPC..." then "Good Witch" Or "Bad Witch", will cause the high witch of that alignment to visit the house in maximum one hour.

Witches have many new abilities, including casting spells, crafting exclusive items, creating reagents and potions, being able to travel to other lots via broomstick, teleporting around lots and owning feline familiars, spectral cat. Atrociously evil witch can bring the dead to life as a Zombie.

To cast spells or create potions and items (specifically, thrones, floor lamps, wall lamps and hanging lamps), reagents are required. As said above, these can be obtained by purchasing them from NPC witches, or crafted in a cauldron. Unlike in The Sims: Makin' Magic, Sims aren't required to pre-prepare spells before casting, but just need the right combination of reagents on the spot. Witches with higher magic skill have a higher success rate when casting spells and have access to the more powerful spells.

Spells are organized into three categories: "Good", "Neutral" and "Evil". Sims can study Good, Neutral, or Evil magic in their spell book. This increases their magic skill points, and changes their alignment towards the direction they are studying. To be able to use the strongest Spells and craft the most useful Items of each alignment, a Witch must be at the maximum level of their alignment. For example, an "Infallibly Good" Witch can cast "Expello Mortis" and also craft the "Throne of Light", a chair which charges all Motives simultaneously if used by Witch with correct alignment, whereas they would be required to earn full "Atrociously Evil" status before being able to cast "Vivificus Zombiae" and craft the "Throne of Darkness". The two thrones do exactly the same thing, but if a non-magical Sim sits in the chair, no mood effects will occur. If a witch sits in the opposite chair (i.e. an Evil witch sits in the the Throne of Light), the witch's motives will go down rapidly. Neutral witches will benefit from both types of chair.

Magic items/reagents can all be crafted in the cauldron, but some reagents can be bought at the secret magic lot of the witch's alignment.

Casting more "Good" spells will result in a witch becoming "Good", and casting even more will make the witch "Infallibly Good". Both alignments wear white robes and hats, craft items which suit the "Good" witch stereotype, and have cauldrons which emit blue smoke. "Infallibly Good" witches also have a blue aura and gold sparkles on their skin. Good spells are intended to improve other Sims' lives, or their environment.

Using a "Neutral" spell will move a witch closer to the neutral alignment. They will thus make a Good caster less good and an Evil caster less evil. Neutral witches, when wearing normal clothes and a normal hairstyle, will appear as completely normal Sims/zombies/vampires/werewolves/etc. Hovering the cursor over the Sim to see his/her name will give the extended name that identifies him/her as a witch.

Once enough "Evil" spells are cast, a witch will become "Evil" or "Atrociously Evil". They will wear black robes, craft gothic-like items, and have a cauldron which emits red smoke. "Atrociously Evil" witches have green skin and a sickly green aura, similar to the Wicked Witch from the Wizard of Oz movie, or from the Broadway musical Wicked. (Despite the resemblance, they will not die when doused with water.)

Although there is no official witch/warlock state, players can buy the Lady Ravendancer Goth's Book o' Spells from The Sims 3 Store for 500 SimPoints. This item costs §72,000, and can be found in Buy mode under Misc. Entertainment/Skills.[1]

"This suspicious tome is chalk full of discount charms and hexes! Curse your neighbors, enchant your shoes! Guaranteed to never leave a whisper of glitter, this book will strike fear and mirth into your friends."

Conjure, brew and imbibe your way to magical and mystical excitement with every turn of the ladle ‘round Lord Vladimir’s Magic Cauldron! Collect or conjure dozens of potion components, brew up a magical concoction, and then throw caution to the wind and take a big swig of MAGIC! Mmm... it’s delicious!

It has been rumored that the High Witch is Bella Goth. The Sims 2 Chat confirms that Bella Goth is not a High Witch.[2] There are two High Witches, one of light and and one of dark. Who they are depends on the neighborhood. In Belladonna Cove, the High Witches will always be Phoebe Adams (Good witch) and Frances McCullough (Evil witch). In other neighborhoods, the high witches will be chosen randomly with unique names.

If Pets is installed, Witches may discover their feline familiar. Spectral cats can be summoned from "The Void" at any time, and resemble its owner's alignment, and may return to "The Void" when it's too uncomfortable, or when its owner leaves the lot. Feline familiars are like cats, except in appearance, the lack of the need of a litter box and ability to breed. If treated well, the feline familiar is more likely to stay. They can be trained, but cannot acquire a job.

Retrieved from "https://sims.fandom.com/wiki/Witch?oldid=385429"
Community content is available under CC-BY-SA unless otherwise noted.