watch 02:48
Wiki Targeted (Games)
Do you like this video?
Play Sound

The Wise Old Man is an NPC that only appears in the secret lot of the Bon Voyage Sub-neighborhood, Takemizu Village, which is called Pagoda in the Shadows. He is based on the idea of a shaman, as he holds a secret that can be told to selected Sims.

He will not talk to Sims until they pour some tea for him. Once they do, he will perform tai chi. If a Sim joins him for a few Sim hours, he will say, "You seem to possess the charm and panache necessary to bear The Legend." He will then teach the Sim the dragon tale story. Sims who hear the story will receive an ancient dragon legend scroll, and they must have it in their inventory in order to tell it to other Sims.

The objective here is simply to build up a relationship with the man and wait. It's advisable to know how to use the gesture "Bow" before visiting this lot. The Pagoda in the Shadows is a big pagoda. There is nothing on the lot except bamboo, the man in his pagoda, and a tea set. There are no bathrooms or real food on the lot.

When summoned to a lot by the mailbox with testingcheatsenabled, in the Make NPC section that summons random NPCs and visitors he is referred to as the Hermit although when he's summoned the tool tip still calls him Wise Old Man. Using the voodoo doll on him may help make him friendlier.

His facial structure is similar to that of Valentine Monty. His personality, zodiac sign, aspiration, skill points, and interests are randomized when his character is generated in-game.

The Wise Old Man is generated once his NPC purpose is needed, unlike most other NPCs that exist before the start of the game. So technically speaking, there are no pre-made Wise Old Men, only game-generated ones. This is also the case of Edward Dregg and Unsavory Charlatan.

Warning
Do NOT attempt to add the Wise Old Man to a household, make him selectable, turn him into a supernatural creature, or tamper with him in any way or form outside of the in-game purposes. Doing so will corrupt the neighborhood he is located in.

Wise Old Man and a Female Sim in the Pagoda. 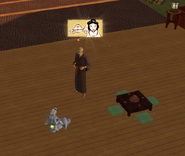 The Wise Old Man teaching a Sim the dragon tale.
Add an image to this gallery
Retrieved from "https://sims.fandom.com/wiki/Wise_Old_Man?oldid=933867"
Community content is available under CC-BY-SA unless otherwise noted.