The Sims Wiki
Register
Don't have an account?
Sign In
Advertisement
in: Sims, Male Sims, Elders,
and 17 more
English

Winford Rhinehart is a pre-made elder Sim and a castaway on Felicity Island, one of the neighborhoods shipped with The Sims Castaway Stories. He is one of the survivors of the Queen Solomon and gets standed at the Barren Banks. In the Shipwrecked and Single story, when the protagonist arrives there, Rhinehart went of into the jungle to collect food for himself and the other survivors. He first appears in the story, when the protagonist finds him in The Boneyard. He is introduced as Professor Rhinehart and claims to have been studying the island and its natives for years. He helps and counsels the protagonist, but his knowledge of the island becomes suspicious and his true motives are revealed near the end of the story.

When a mysterious disease spreads among the natives, including the protagonist's lover, Professor Rhinehart wants the protagonist to retrieve the Staff of Tuzu from The Petrified Forest. He claims that The House of Tuzu contains an antidote for the disease, but needs the staff to open it. While the protagonist is on their journey to retrieve the staff, they come across Bart Pittman who reveals, in his last breath, that Professor Rhinehart is responsible for the Queen Solomon's shipwreck. Rhinehart had bribed Pittman to get into the engine room of the cruise ship, where he caused an explosion that ultimately sank the ship.

In the end, using the Staff of Tuzu at the House of Tuzu, the protagonist opens Professor Rhinehart's way to eternal life. Once Rhinehart drinks from the Chalice of Youth and turns into an adult, the player is given the choice either to banish or reward him by giving him youth, ironically by turning him into a toddler, guided by Amanaki Tama. If Rhinehart gets banished, he is never seen in the game again, unless cheats are used. If Rhinehart is turned into a toddler however, he will be added to the Tama family and becomes playable from their home lot; The Shaman's Hut.

At the end of the story, a package arrives for Professor Rhinehart, containing a weather control device, which was part of the evil project he was working on at The Abandoned Research Base to set himself up as an immortal volcano god. However, the protagonist receives the package as a story reward instead.

Professor Rhinehart has the Knowledge aspiration and the Cancer zodiac sign. His personality consists of a middle alignment between all traits. He has no skill points. His main interests are Politics, Health, and Weather. According to his SimDNA in SimPE, his hair was brown before it turned grey. 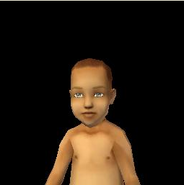 Winford Rhinehart as a toddler. 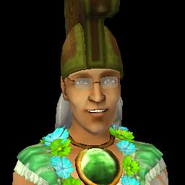 Winford Rhinehart as an adult.
Español Português do Brasil Русский
Community content is available under CC-BY-SA unless otherwise noted.