The Sims Wiki
Register
Don't have an account?
Sign In
Advertisement
in: Worlds in The Sims 4, Get Together, Windenburg
English 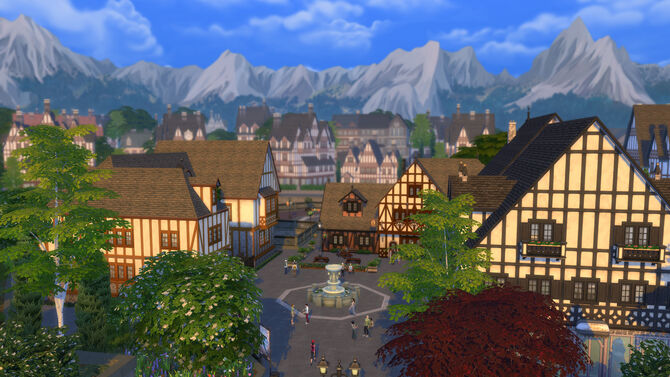 Windenburg is a world introduced in The Sims 4: Get Together. Its architectural design—dominated by timber-framed houses—and its structural design, in combination with modern city aspects, is heavily based on central and southern regions of Germany. Castle-like ruins can be found on the mainland and most of The Crumbling Isle is surrounded by crumbling man-made walls. These ruins are inspired by Gothic buildings in Europe and they indicate the old age of the city.

The original owners of this preserved estate loved it so much, they're still here!

There are a total of 14 residential lots and 13 community lots in Windenburg.

§20,000
Candy Behr, Yuki Behr
Yuki and Candy recently inherited a quaint, modest home from their dearly departed Grandma Behr. Geeky teen Yuki absolutely idolizes her cool DJ sister, Candy, but Yuki’s got some mad skills of her own. Sure, she may not be the edgy Spinmaster Candy is, but she can annihilate anyone at Blicblock. She’s also quickly becoming Windenburg’s most infamous underground hacker.

§20,000
Clara Bjergsen, Bjorn Bjergsen, Sofia Bjergsen, Elsa Bjergsen
Teen musical prodigy Sofia has dreams -- she's going to make it big. Not even her gloomy dad, perfectionist mom, or pesky genius kid sister can stop her from making her way to the top!

§20,000
Sergio Romeo, Joaquin Le Chien
Tech-savvy hunk Sergio and brash DJ Joaquin have little in common... except for the finer things in life. As they climb the ranks and rake in the bucks, just how awesome can they make their sweet pad?

§5,500
Ulrike Faust, Maaike Haas
Bookish Maaike, and artsy Ulrike aren't materialistic, but even these two roommates admit they could use a few upgrades around the house. Will Maaike be able to sell a few stories, or will Ulrike finally put out a painting that meets her exacting standards?

§20,000
Moira Fyres, Dominic Fyres, Siobhan Fyres, Morgan Fyres
Things couldn't be better between lovebirds Dominic and Moira -- too bad the same can't be said for their daughters! Free spirit Morgan just wants to have fun with her Renegade friends, but Siobhan can't stand that attitude. Siobhan is determined to build a network of popular friends who can help her career aspirations. Will Siobhan move out on her own before the tension in the house explodes?

§25,500
Mila Munch, Gunther Munch, Wolfgang Munch, Lucas Munch
Raising three kids is never easy -- particularly when one refuses to move out of the house, and one is a gloomy rebel. But Mila Munch is nothing if not dedicated to her family, and her sweet little Lucas always cheers her up after a hard day of restaurant work

§16,500
Marcus Flex, Paolo Rocca, Jade Rosa, Eva Capricciosa
Drink, flirt, dance, repeat. Jade, Eva, and Paolo jumped at the opportunity to explore the world and set up the ultimate crib in Windenburg as soon as Marcus extended the invite. And the party hasn’t stopped since. Drama is never far behind when they’re together - and they’re always together! With only one and a half jobs between the four of them, how in the world do they manage to pay their bills?

§65,000
Jacques Villareal, Luna Villareal, Hugo Villareal, Max Villareal
After Jacques’ wife disappeared under... ahem, mysterious circumstances, he was left raising three kids in his enormous mansion. Luna and Hugo are good kids with typical teen problems, but the youngest, Max, is a terrifying force of nature. Will the kids drive Jacques crazy before his eccentric habits and hobbies drive them crazy?

With The Sims 4: Seasons installed, Windenburg experiences cool falls and springs, with sunny or cloudy skies and occasional rain. Summer temperatures range from warm to heat wave with possible thunderstorms. Winters are characterized by a lot of snowfall and cold or freezing temperatures. Dangerous blizzards can occur in the winter.

Windenburg old town from above

The Crumbling Isle during autumn.[TS4:S]

Another view of The Crumbling Isle during autumn.[TS4:S]