The Sims Wiki
Register
Don't have an account?
Sign In
Advertisement
in: Sims, Female Sims, Sims with an ambiguous age,
and 20 more
English

Willow Nigmos (née Muenda) is the deceased sister of Olive Specter. Willow was married to Creon Nigmos and had a daughter with him, Ophelia.

She is deceased before the game begins, and it is said that she drowned. After her death, Willow's daughter, Ophelia, goes to live with her aunt, Olive Specter (Willow's sister). At the start of The Sims 2, Olive is an elder, and Ophelia is a teenager, and they live together in their eerie home in Strangetown (which happens to be haunted by more than a few ghosts). As a ghost, she looks randomized, and her thumbnail will change. The same goes for her husband, her father, her mother, Melissa Sims, Vicki Sims, Lyla Grunt, and Luc Smith.

Willow is very glitchy when resurrected; her face is badly corrupted, appears deformed and changes constantly. She will be bald, with green eyes instead of brown. It's impossible to change her back to normal unless Dr Vu's Automated Cosmetic Surgeon is used, you will need to completely change her face, but it is not very different from one of the default ones, so it is possible to make her look the same. However, the default 2nd face template looks different on elder Sims, especially elder females.[1] So players will have to age her to something different, age her back to an adult, select one of the broken Maxis face templates, and then age her into an elder.

Like her sister and the other Sims buried on the lot, she has no eyebrows. Despite having the appearance of an elder, she is treated as an adult. Willow was 14 days away from becoming an elder, while her husband is 29 days away from becoming an elder. According to Willow's genetics, her hair was red before it turned grey, and though she has brown eyes in her thumbnail, her genes are for green eyes. Despite this, neither of her parents had red hair or green eyes.

According to SimPE, Willow had unlinked relations with every deceased Sim (except Danielle Greaves and Jessica Ebadi) and townie Bella Goth.

If Willow has more children after being resurrected, they will inherit her corrupted facial features. This also happens with Lyla Grunt and Creon Nigmos. Exporting her to the body shop will result in the application crashing.

Warning
Resurrecting her has been known to cause corruption. 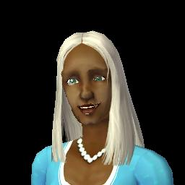 Willow with her glitchy genetic face and eye color. 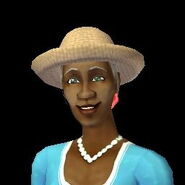 Willow's intended appearance in The Sims 2, based on gmdc data found in her character file. 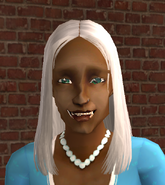