The Sims Wiki
Register
Don't have an account?
Sign In
Advertisement
in: Sims, Male Sims, Adults,
and 11 more
English

Will Wright (born January 20, 1960 in Georgia, USA) is the creator of both the SimCity series and The Sims series and one of the founders of Maxis.

Creation of SimCity and Maxis[]

In 1984, Will Wright developed Raid on Bungeling Bay. During development, Wright realized that he had much more fun creating the various game levels than he did playing the game itself. He would later apply this concept to the creation of a city simulation game called SimCity.

Wright had a difficult time finding video game publishers willing to take a chance on SimCity, since it was a major departure from other video games developed up to that time. In 1987, Wright and Jeff Braun co-founded Maxis and were able to publish SimCity. Wright was instrumental in the development of two sequels, SimCity 2000 (1994) and SimCity 3000 (1999), both developed through Maxis.

Creation of The Sims[]

It is said that Wright devised the basic idea of The Sims after a fire destroyed his home, and he had to recreate everything in his life from his house to valuables. Maxis was resistant to the idea of The Sims and ultimately refused to develop it. However, in 1997, Maxis was acquired by Electronic Arts, who were ultimately more receptive to Wright's ideas. Despite this, The Sims was still considered a gamble, and only a limited number of copies were initially produced. The Sims went on to defy expectations, becoming one of the most popular video games of all time.

Will Wright was not directly involved in the development of The Sims 2 or later games in the series, though he is still given special credit for its initial creation.

After The Sims, Will Wright began developing Spore, an evolution-based strategy game, which was released in 2008.

In April 2009, Wright left Electronic Arts to start up "Stupid Fun Club," an EA-backed think tank.[1] Wright was succeeded in his position by Lucy Bradshaw, Maxis' General Manager, who now leads the Sims and Spore franchises.

In 2010, Wright began producing a community-based television show called Bar Karma, which aired for one season in 2011.

In October 2011, Wright joined the board of directors for Linden Lab, the creators of Second Life.

References and allusions in the games[]

Will Wright meeting the Newbies

The "giant" Will Wright found at the top of the beanstalk in The Sims: Makin' Magic 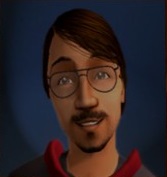 Painting of Will Wright from The Sims 2: University

Whack-A-Will! game from The Sims: Vacation 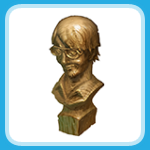 Will Wright Replica from The Sims FreePlay 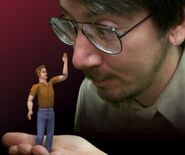 Will Wright with a Sim

There is a page on Wikipedia dedicated to this real-world topic. Click here to view this article's associated Wikipedia page.
Español Français Português do Brasil Русский
Community content is available under CC-BY-SA unless otherwise noted.
Advertisement