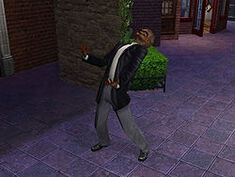 A werewolf is a mysterious magical creature that appears in both The Sims: Makin' Magic and The Sims 2: Pets.

Werewolves are Sims which have been infected with Lycanthropy, a life state introduced in The Sims 2: Pets. Sims can become Werewolves when bitten by the leader of the pack, a large wolf distinguishable by its dark coat, heavy build, and characteristic glowing yellow eyes. The leader only appears at night. Lycanthropy can also be transferred using the Savage interaction, though that will leave two bad memories - one of losing a fight to the sim who initiated the savaging, and another for becoming a werewolf - and it is common for the victim to mourn for awhile because of that, despite wanting to become a werewolf.

Once a Sim has become a Werewolf, they will transform every night at 8:00 o'clock. Their energy shoots up and their hunger need plummets, sometimes making it a good idea to prepare a meal in advance; but this Hunger drop will never immediately kill the Sim. A Werewolf Sim can howl when selected, an action which lowers the bladder need of all non-Werewolf Sims in the room by half. When outside, a Werewolf can also howl to summon wolves to the lot. Sims gain the Irritate > Grr! interaction which can be used against another Sim regardless of relationship and will lower his or her Bladder need. Werewolf Sims can even turn other Sims into Werewolves with the Savage interaction. Werewolves will transform back every morning at 6:00, disabling all Werewolf-specific interactions until nightfall.

The personality of Werewolf Sims will slowly shift over the course of a few days, eventually reaching 0 Neatness, 10 Outgoing, 10 Activeness, 10 Playfulness, and 0 Niceness; the Body skill will also increase. As such, Werewolves will tend to eat more quickly than other Sims and can even lick their plates clean when finished, but will rarely clean up after themselves, are notoriously messy in the shower, and cheat without instruction while playing chess.

Knowledge Sims naturally aspire to Werewolf-related wants, such as Sim howls, Become a Werewolf, and Turn Sim into Werewolf, while they fear being cured of Lycanthropy. A Sim with any other aspiration are exactly the opposite, fearing becoming a werewolf and wanting to be cured if turned. Interestingly, even if a Sim wants to become a werewolf, once they do, it will always appear as a bad memory.

Lycanthropy can be cured by purchasing the Lycanthropic-B potion from the obedience trainer, or from the gypsy if Nightlife or Apartment Life is installed. Unlike with the Vamprocillin-D potion, visiting Werewolf Sims cannot be influenced to drink Lycanthropic-B and must either be directed to do so on their home lot or taken control of via a game hack.

Werewolves are better at training dogs. They can train a command in 1 hr. compared to the normal 2 hrs. .

Note that pregnant Werewolf Sims are unable to savage. Also, if a Werewolf has a custom skintone when in normal-Sim form, they usually won't get the hairy Werewolf skin at night. This is a glitch.

Summoning The Leader of The Pack

Players finding it difficult to attract the leader of the pack to their lot by normal means (additional trees, bushes), and who wish to begin the path to becoming a werewolf, can use the testingcheatsenabled boolProp cheat to summon the wolf.

After cheats are enabled, Shift-click on the lot mailbox, select NPC, and then choose Leader of the Pack. After a certain amount of time, the wolf will appear at the edge of the lot, and the player's Sim can begin forging a positive relationship with the beast.

Remember that using boolProp cheats can possibly put your game state at risk, so back up your game state before proceeding. Also remember to turn off the cheat once you have summoned the leader of the pack for the first time, as leaving the boolProp cheat active over time can also potentially damage one's game state.

While there has not been much data on werewolf physiology released in The Sims 2, many things have been left to the players to find out.

During the day, werewolves appear as normal Sims, albeit with very canine-like personalities. This change in personality may be attributed to a change in brain chemistry, and/or an overbalance of certain hormones. Genetically, the werewolf's personality remains the way it was before they were transformed.

During the night, the Sim in question becomes, in essence, an anthropomorphic wolf. Their howl ability causes a drop in the bladder need of non-werewolves, which in werewolves is possibly a naturally developed equivalent of the Brown Note used to ward off predators, such as Sims in lynch mobs. The subsequent urination creates enough embarrassment for the werewolves to escape from the scene in one piece. The nightly transformation causes an extremely fast 'big crunch' metabolism in the stomach to create Energy, change chemicals in the brain and facilitates the growth of hair all over the body, along with tinted irises, all at once, within a few seconds, leaving the werewolf hungry and onlookers scared and confused.

Werewolves cannot pass the condition onto children they may have, unless the child is a teen or older.As evidenced by the increase in Body skill, werewolves seemingly accumulate vast amounts of practical knowledge on the workings of the body seemingly only from transforming back and forth, enabling them to learn how to fight, or to do feats such as skipping, doing yoga, or practicing Tai Chi effectively, knowledge possibly from means of telepathy, which suggest that it is potentially extracted from a hive mind. This is possibly unlikely, as if this was true, the werewolf would accumulate other skills other than Body skills. Strangely, werewolves do not build muscle mass as would be expected by the metabolic breakdown during transformation and instead accumulate body skill. This is most likely the result of the same wishful thinking that caused the programmers of The Sims 2 to have Sims gain an abnormally high amount of Lifetime Aspiration Points from WooHooing for the first time.

Male werewolves will gain a new "ruffled" hairstyle after they transform, while females will keep their original hairstyle. In this case it cannot be changed back until the werewolf reverts back to human form. If the player attempts to change the Sim's appearance in front of a mirror, the Sim will say there is too much hair.

The effect of werewolves are created cosmetically with 5 separate opaque overlays, unique to each skintone.[1] The skin tone of the Sim determines the overlay used by the game. The lighter the skin tone, the lighter the orange that can be seen on the werewolf where hair isn't present. Naturally, this has created a problem for custom skin tones, which was solved with a modification. The alien skin tone, even if replaced by a default replacement, turns the skin visible on the alien werewolf into a sharp green, rather than an orange, and the face will appear green. The alien eyes are replaced with a special 'hybrid' of werewolf and alien, a yellow iris and black sclera.[citation needed]

These specifications cause many problems for the modding community or anyone wishing to modify the characteristics of a werewolf. A vampire, for example, only contains one texture which is partially transparent, which is not used as expected for a werewolf. It is, however, possible to use transparency to allow skin to show through in modding.

Zombie-Werewolf hybrids strangely do not gain hair when they transform[1], though males will still gain the werewolf hairstyle. They will also lose their "zombie gait" walk and will move like ordinary Sims, making this combination useful, albeit faulty.

Retrieved from "https://sims.fandom.com/wiki/Werewolf?oldid=381058"
Community content is available under CC-BY-SA unless otherwise noted.