The Weathernaught 57X is an aspiration reward that was introduced in the The Sims 2: Seasons. It's a weather machine that allows Sims to change the season, extend the current season, maintain the current season indefinitely, or change the weather. It has five uses, which are indicated by five lights that are visible when its antenna is open. However, if the Sim using it is not in gold or platinum aspiration, it may cause meteors to fall on the lot for a few seconds. Luckily, if this happens, it will not use up one of the Weathernaught's five uses.

If the Sim used the Weathernaught 57X to change the weather, the antenna will remain open until the created weather has run its course, unless someone turns it off before then. It should be noted that the machine can not only create precipitation, but banish it, creating a clear sky. If this is done, the antenna will remain open, and the clear sky will be maintained until it is turned off. Using the Weathernaught 57X to change seasons will not turn off the clear sky. The current weather condition cannot be selected, so the "Clear Sky" option can only be chosen if there is some sort of precipitation. However, once that option is selected, it will be carried out even if the precipitation clears before the Sim activates the Weathernaught 57X.

If The Sims 2: FreeTime is installed, using the Weathernaught 57X builds enthusiasm for the Science hobby.

Note
While the Weathernaught 57X is enforcing clear sky, the "Watch Clouds" and "Stargaze" options may not appear when clicking on terrain.

The Sims 3: Seasons introduces two weather-controlling objects, The Cloud-inator 9000 and the Climatron Control Unit, both of which are available as lifetime rewards. Both objects are available for teens and older.

The Cloud-inator 9000 is a small, 1x1-sized lifetime reward which costs 30,000 Lifetime Happiness points. When purchased, it is placed in the inventory of the Sim that bought it.

Although The Cloud-inator has unlimited use, this object has only 3 uses which are always a success. If the Sim used the object for the fourth time, The Cloud-inator will not work and instead bursts itself, creating a storm cloud which then strikes the user with lightning, giving them the "Singed" moodlet. 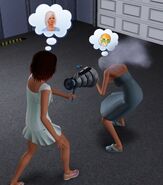 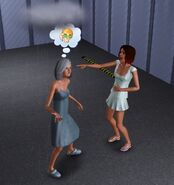 The Climatron Control Unit is a lifetime reward which costs 40,000 Lifetime Happiness points. When purchased, it is placed in the inventory of the Sim that bought it. Outside of the inventory, the Climatron is a large, 4x4-sized object.

The Climatron is used by dragging it out of the inventory and placing it somewhere on the lot. The Climatron will now have one selectable option: Change Weather. The weather can be changed to either Sunny, Hail, Snow, Rain or Fog, however the weather the neighborhood is currently experiencing will not be selectable. Once a type of weather has been selected, the Sim being directed will turn on, operate and turn off the Climatron. The selected weather appears shortly after the machine turns off.

It is also possible to control the seasons without the weather-controlling machine by enabling testing cheats and shift-clicking on the ground. 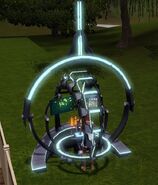 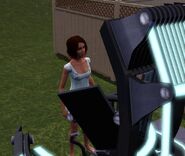 Weather-controlling machines return in The Sims 4: Seasons as buyable objects. They can be used to change the current weather, temperature, and (after upgrading) even the season. Upgrades will also increase the likelihood of certain functions succeeding. Sims with a low handiness skill may electrocute themselves upgrading the machine. A Sim can also be electrocuted if they use the machine in the rain.

The Weather Machine is the main part of the Climate Control update for The Sims FreePlay, which was released June 6, 2013.

In May 2013, a friendly green alien, Osiris, landed in Sim Town, giving the players a certain amount of limited time goals they needed to complete in order to get limited edition teleporter. As this event finished, the following notification appeared, revealing a tip:

So what's coming up in the next update? Well, Osiris is going to start work on some kind of new device... so be sure to tune in to see WEATHER or not he needs your help!

Osiris is back with new goals that players need to complete for a weather machine. The Weather Machine was separated into three models, depending on number of goals players completed:

The machine can be bought in the Home Store under the Electronics tab, for 70,000 Simoleons, and can only be placed once per household.

Retrieved from "https://sims.fandom.com/wiki/Weather-controlling_machine?oldid=938417"
Community content is available under CC-BY-SA unless otherwise noted.