Waring Sinclair is a pre-made playable elder Sim who resides in Four Corners, one of the neighborhoods shipped with The Sims Life Stories. He is the husband of Ashley Sinclair (née Pollard) and works as a Business Tycoon in the Business career, but is retired in the Free Play version of the neighborhood. Waring is a successful businessman who fears that his wife will cheat on him; in the Story Mode version she does, with Dylan Kincaid. Waring seems to be unaware of his wife's affair. He is a minor character in the story who only appears at Mickey and Agora's wedding.

He and Ashley can be found living in 22 Hyacinth Circle at the end of Riley's story, as well as in the Free Play version of the neighborhood and are ready to be played. Waring is on his 1st day as an elder with 23 days left before he dies of old age. He will die 3 days before his wife becomes an elder. Waring has the Fortune aspiration and the Aries zodiac sign. According to his SimDNA in SimPE, his hair was brown before it turned grey.

Strangely, Waring's lifetime want at the start of the game is to reach the top of the Business career, even though he has already achieved it. He shares this oddity with Grayson Bui, a townie from Bluewater Village.

Even though Waring has reached level 5 of the Business career, he doesn't have the corresponding career reward available for him to purchase. In his memories in the Story Mode version of the neighborhood, Waring has a memory of meeting an unknown Sim, probably a result of deletion. 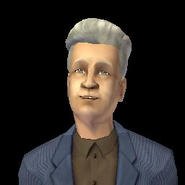 Waring's head-shot in the Free Play version of the neighborhood.
Add an image to this gallery
Retrieved from "https://sims.fandom.com/wiki/Waring_Sinclair?oldid=912609"
Community content is available under CC-BY-SA unless otherwise noted.