The voodoo doll is introduced in The Sims: Livin' Large and is available in buy mode. The doll can be used to torment Sims. When used on a Sim, the Sim's comfort and fun motive will drastically decrease. If the victim is in the same room as the Sim using the doll, they may slap them, and their relationship will decrease. The doll cannot be used autonomously.

The voodoo doll returns in The Sims 2: Bon Voyage as an object only obtainable while on vacation.

The doll can be used to perform various activities, from useful things such as making friends or falling in love with another Sim, or more annoying things such as making a Sim hotter or colder. The voodoo doll must be in the selected Sim's inventory in order for it to be used. The doll may fail and backfire on the user if used too often, and can be sold in Sim-owned stores, if frequent visits are made to the Witch Doctor for new supplies.

If a Sim wants the doll, they can acquire one from the witch doctor after repairing all of his broken appliances. As with other repairs, success depends on the Sim's mechanical skill. The witch doctor will lie in his hammock after being greeted, forever lying there until all of the appliances are repaired. Upon successful completion, he will give the Sim the doll as a gift. However, he will cancel the interaction if the Sim is still busy and won't accept the doll. This can be inconvenient for a Sim trying to get the doll, as that Sim may need to be idle for a while before the Witch Doctor tries to give the doll again.

Five voodoo dolls may be collected on the souvenir shelf. If that is done, nearby Sims will be cursed into imagining they are being attacked by a bee swarm.

The Witch Doctor is himself immune from the voodoo doll. The doll will always fail and backfire on the user if used against him. After that, he will laugh at the user and the effects of the voodoo will be deflected onto the initiating Sim.

The voodoo doll can perform these actions:

The Malleable Mimic Voodoo Doll can be purchased from The Sims 3 Store.[1] Teens through elders can bind it to an unsuspecting Sim and use magic to influence their life. Using the voodoo doll excessively might result in electrocution or "The Cupid's Wrath".

The voodoo doll can perform these actions:

The Voodoo Doll returns in The Sims 4 as an object with a life of its own. To obtain Madame Zoe's Voodoo Doll, a Sim must reach level 3 of the mischief skill. To gain the mischief skill, Sims can perform various mischievous social interactions, such as "Troll teh Forums", or read a book about the mischief skill. After the Sim has reached level 3, they can order a voodoo doll from a computer on residential lots.

Voodoo dolls can be found randomly while fishing, at the flea market in San Myshuno, or while digging for collectibles around rocks. They can also be obtained by winning the contest in the Humor and Hijinks festival in City Living. In The Sims 4: Realm of Magic, a living voodoo doll (called a Hex Doll) is one of the familiars that spellcasters can own.

The doll's name may be a reference to Madame Zoe from MySims, a fortune teller.

The amount of interactions that are available on the voodoo doll increases with the Sim's mischief skill. Having Level 2 in charisma also unlocks the ability to cuddle the Voodoo doll.

A successful action will give a confident moodlet to the initiating Sim. If an action backfires, the voodoo doll will point at the Sim and stare as purple gas is sprayed into the Sim's face, causing them to get a negative moodlet and become uncomfortable or sad.

Sims can also summon other Sims onto the lot with the doll. If City Living is installed, Sims can burn the voodoo doll in fire pits.

A Sim using a voodoo doll from The Sims 2: Bon Voyage. 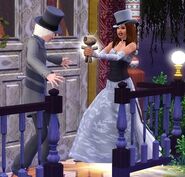 A Sim using the voodoo doll from The Sims 3 Store. 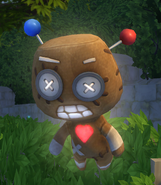 A Hex Doll familiar in The Sims 4: Realm of Magic.
Add an image to this gallery

Retrieved from "https://sims.fandom.com/wiki/Voodoo_doll?oldid=893817"
Community content is available under CC-BY-SA unless otherwise noted.