The Sims Wiki
Register
Don't have an account?
Sign In
Advertisement
in: Sims, Male Sims, Young adults,
and 20 more
English

Vladislaus Straud, also known as Count Vladislaus Straud IV or Vlad, is a pre-made vampire who resides in Forgotten Hollow, the world introduced in The Sims 4: Vampires. He lives on his own in the Straud Mansion lot and begins with §20,000.

Vlad is a young adult, even though he both claims to be and has the appearance of an elder. This is most likely due to vampires not aging past the young adult life stage. He is unemployed and has eight skill points in charisma and ten points in both pipe organ and vampire lore.

Vlad has lived in Forgotten Hollow for 200 years. There is a statue of him in the town center, though the town's Sims think the statue is of his Great Grandfather, Vladislaus Straud the First. However, the local vampires know the truth; Vlad founded Forgotten Hollow and he still runs it.[1]

According to his painting that is found inside Straud Mansion, Vlad was the sole survivor of a settling party of 25 Sims that disappeared. He was impacted so deeply that he never explained what happened to them, but founded the town on their last known location in their memory.

By sunset, Vlad starts his daily routine which includes playing some haunting melodies on the pipe organ and taking a walk through the cemetery of his estate. When the sun starts coming up, he spends some time in dark meditation to re-energize himself and reading through the Encyclopedia Vampirica, most of which is about him, before he descends into his crypt.

Vlad dislikes his neighbors, the Vatore siblings, Caleb and Lilith, as they believe in alternatives options to the traditional drinking of Sims's plasma. They will also object to Vlad's wardrobe choices, personal hygiene, and showing his dark form in public. Vlad owns a hundred grey coats as he believes they go with everything and always stay in style. At high moon, Vlad and Caleb once had a duel which Vlad won; because of this, many Sims strongly dislike him. With the exception of Renegades club- they attempted to recruit him thanks to him having the Evil trait, although Morgan Fyres doesn't seem happy about this.

An official blog for The Sims 4: Seasons reveals that Vlad has a cousin named Arthur Climate. The Climates reluctantly invite Vlad over for a Harvestfest gathering, unaware that he is a vampire.[2]

As a vampire Vlad has a human appearance as well as a dark form. Apart from the size of the ears and eyes, his facial features are the same in both versions. However, Vlad looks drastically different in his vampire form due to not having any hair, including facial hair. His skin possesses visible facial lines as a vampire. Additionally, he has protruding fangs and radiating eyes.

According to a teaser for Vampires, Vlad turned Miss Hell into a vampire, who then turned Caleb Vatore.[3] Vlad also turned Caleb's sister, Lilith Vatore.[4]

Vlad rising from a coffin

Vlad reacting to the sunlight

Vlad playing with the organ

Vladislaus as seen in a render 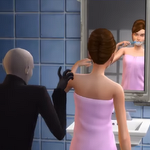 Vlad about to transform Miss Hell into one of his minions.

Vlad about to transform Lilith into a vampire.

Vlad's text to a Sim who has been bitten by a vampire and is transforming.

Vlad's text to a Sim transformed into a Vampire. 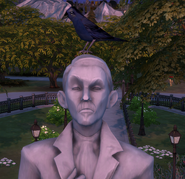