Vincentio Pantalone is one of the pre-made, yet unplayable ancestral Sims that resided in Veronaville in The Sims 2, and reappears as a playable Sim in Monte Vista in The Sims 3: Store. He was the son of Proteus, and Julia Pantalone, the husband of Francisca Pantalone, the father of Isabella Monty (née Pantalone), the grandfather of Bianca, Antonio, and the late Claudio Monty, and the great grandfather of Romeo, Mercutio, Beatrice, Benedick, and the late Unborn baby Monty.

Vincentio reappears in Monte Vista and lives there with his wife. Oddly, both are elders despite being deceased as adults in The Sims 2. Vincetio is a retired Vice President, and he has 2 points in Logic, 1 in Athletic, 1 in Cooking, and 1 in Fishing.

Vincentio's gravestone does not exist within Veronaville, so he can't be made playable without the use of hacks. As a result, the only indication of Vincentio's existence is provided by the family tree of his descendants. He has no skill points or personality points, and if he is resurrected with hacks, he will have a random set of interests.

There is a hidden picture of Vincentio that can be found in the game files such as SimPE, this hidden one quite different, showing Vincentio as an elder, instead of an adult. It is unknown why the picture exists, though this happens with many more Veronaville Sims.

Vincentio apparently lived an extremely long life, as he lived to see his grandson, Claudio, get married as an adult. This might as well be an error as Vincentio died as an adult while Claudio was an adult, which is not possible in normal gameplay.

Vincentio was the Duke of Vienna in Shakespeare's Measure for Measure. 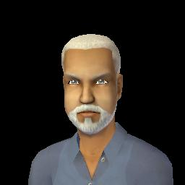 Retrieved from "https://sims.fandom.com/wiki/Vincentio_Pantalone?oldid=877668"
Community content is available under CC-BY-SA unless otherwise noted.