The Sims Wiki
Register
Don't have an account?
Sign In
Advertisement
in: Sims, Male Sims, Elders,
and 32 more
English

In The Sims 3, Victor is already deceased and his tombstone can be seen in the Goth family graveyard. He is buried with his wife, Gretle, along with his daughter-in-law's parents and an unknown relative (Lolita Goth).

Like the other dead Sims buried on the lot, Victor's ghost haunts the Goth Manor. He has the unflirty trait, which is incompatible with the flirty trait, one of the traits that his wife has.

Strangely, Victor lacks glasses in The Sims 3, considering that he had them in The Sims 2. He also has a different mustache from the one in The Sims 2, and wears a black suit with a black bow tie, instead of a grey pinstriped suit with a grey striped tie. His eyes are also blue, instead of brown, and his facial structure is overall quite different.

If Victor is resurrected and aged down to an adult, it will be discovered that he had red hair with brown roots before it turned grey. This contradicts his genetic information in The Sims 2 where his hair was blond before it turned grey. It's possible that he dyed his hair red prior to becoming an elder. All of the other Goth family members that are buried with him also have this quirk.

In The Sims 3: Supernatural, it was revealed that Victor had a brother, Samuel, and that his daughter, Frida moved away to live with Samuel after a reluctant falling out between her and the rest of her family. The two appear as playable ghosts in Moonlight Falls.

In The Sims, Victor is now long dead. Presumably, he is either buried in the graveyard at his daughter-in-law's home, or one of the ghosts that haunt his grandson Mortimer's home.

In The Sims 2, Victor is now buried in the new Goth graveyard, along with his wife, his son, and his daughters-in-law. Oddly his daughter Frida's tombstone is missing. His mustache can be found in Create a Sim, but has a different texture than the one in his thumbnail. According to his SimDNA in SimPE, his hair was blond before it turned grey. According to his age data, he had 32 days left in the elder life stage when he died. Interestingly, Victor bears a striking facial resemblance to the version of his grandson Mortimer that appears in storytelling pictures, with both of their faces appearing to be based on the third face template.

Victor as a ghost.

Victor Goth's grave, a grandeur obelisk that symbolizes his patriarchy. 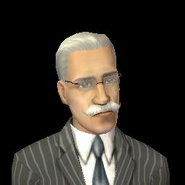