Vicki Vampiress is a vampire vendor on some Magic Town lots. The default lots she appears on are Vernon's Vault and A Spooktacular Spot. Most of the items available from her are related to dragons, hence her cart's name.

She is very talented at dueling, so beating her in a duel will pay well, more than dueling with a normal Sim or another vendor, such as Faerie Queen Mara, and the pay is usually 27 MagiCoins. However, in toadstool races, she will simply walk between them, making her relatively easy to defeat. It will be even better if the Sim learned the teleportation ability from a Magical Growth. She will most often give Wizard Eyelashes as a quest reward. 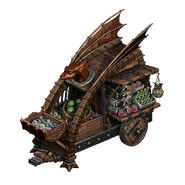 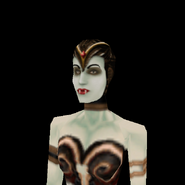 Retrieved from "https://sims.fandom.com/wiki/Vicki_Vampiress?oldid=876986"
Community content is available under CC-BY-SA unless otherwise noted.