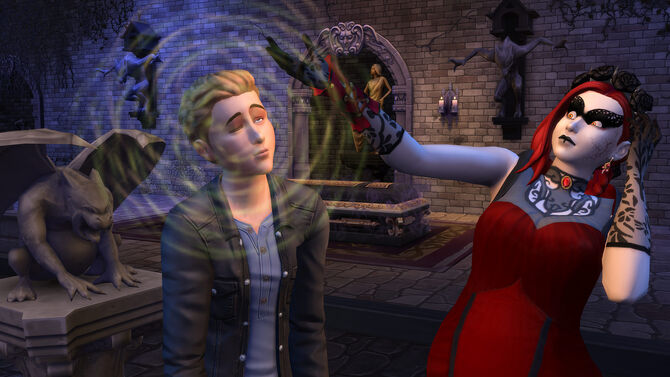 Vampire powers
A perk system feature for vampires · Featured in:

Vampire powers and weaknesses are a customizable perk system and gameplay feature for the vampire lifestate in The Sims 4: Vampires.

There are five Vampire Ranks:

Vampire Sims will have several options to increase their Vampire Rank.

Each Vampire Rank unlocks another row of Powers and Weaknesses to choose from. When vampires reach a new Vampire Rank, they will be required to choose a weakness, or else they will not be allowed to learn any new powers.

Vampires can choose certain powers as they gain more experience and become stronger. There are a total of 25 powers, divided evenly (5 per each Vampire Rank), with several powers having their own tiers (up to a maximum of 3). Also some powers conflict with certain weaknesses, preventing vampires from picking them.

At the expense of becoming a more powerful vampire, the vampire must develop a weakness. There are a total of 11 weaknesses, divided unevenly amongst the Vampire Ranks. Some weaknesses have their own tiers (up to a maximum of 3), and some conflict with certain powers, barring vampires from being able to choose them.

Retrieved from "https://sims.fandom.com/wiki/Vampire_powers?oldid=920812"
Community content is available under CC-BY-SA unless otherwise noted.