Hi! Willow is either away from her laptop right now, or busy reading a page, or generally procrastinating her novel. Leave a message, and I'll reply as soon as I possibly can!

Have a nice day!

RE: Renaming your page[edit source]

Okay, how about now? :) The gaps are removed and the text is aligned.

Unfortunately, I can't deal with the tabber at the moment. Apparently, we can't use tabber inside a table even if the preview shows otherwise. :/ Also, the smaller tables inside the About Me are rounded because that's what will happen if we put a table inside a table. I'll try tweaking once more if I could fix it. Hold on. Nikel Talk – Vote! 16:41, March 19, 2014 (UTC)

I stand corrected. It was the {{Title}} template that caused tabber unusable. In other words, if you want to use the tabber, you need to remove the custom title as a temporary workaround. I recalled I once asked this issue at the Community Central, but I forgot what they responded. I'll try to figure it out tomorrow if I can! Nikel Talk – Vote! 16:58, March 19, 2014 (UTC)

RE: Pages in user spaces.[edit source]

You can make userboxes add categories by adding <includeonly>[[Category:CATEGORY NAME HERE]]</includeonly> to the userbox template. You are welcome to experiment in your userpage or in the sandbox. K6ka (talk | contribs) 19:58, March 27, 2014 (UTC)

RE: That story of mine[edit source]

A hand-written warning is fine as long as it doesn't involve saying that the user could be blocked for their actions (only sysops - think of system operators - can do that). The templated warning message can only be used by rollbackers and sysops. --k6ka (talk | contribs) 21:37, April 23, 2014 (UTC)

It sure is bound to happen. And I am counting on you being able to identify them because I know I won't be able to. ;-)

Hey there Willow, I noticed that you left a comment on The Sims Wiki:Battles page. Just some suggestions, if you want to find out about these two characters, you could read their descriptions on their respective pages. Or you could play The Sims 2 (if you haven't deleted all the pre-made families / neighbourhoods etc.) and play as Albany and Cornwall. Then you might be able to make a decision as to who you want to vote for. C.Syde (talk | contribs) 03:29, May 13, 2014 (UTC)

If you don't want to install The Sims 2 just to help you vote, then that's fine. I know what it's like to have a computer that can't play games up to scratch (the first computer I played the Sims 2 on took like ten minutes to load one family - which was real annoying). It doesn't really matter whether you vote or not. C.Syde (talk | contribs) 06:40, May 14, 2014 (UTC)

Your request for rollback rights has been approved. Congratulations! - LostInRiverview talk ~ blog 02:19, May 18, 2014 (UTC)

Fans need to understand that authors need a break sometimes, and different projects are a good way to keep things fresh. I keep getting that sort of reaction (from fans who think my sims show is a consumer commodity) over the years I made STM.

I could never manage playing so many generations with the same family ;)

Thanks for replying :) If you get fond of a sim in a generational legacy, you can always save a copy of them, and clone them in an alternate universe (it's easier to do this in Sims 3 than in Sims 2).

Great! Thank you. I need to cleanup my userpage, though I'm not a perfectionist but I just want to reorganize it. And, your userpage (and Nikel's) inspired me.

I've noticed that you wrote two words that is despised by a large fan-base...

Do you, by any chance, heard of the blue orb of light with wings named Navi?

(By the way, Hii! It's me from long ago who supported your A Goth Story fanon!)

I LOVE ZELDA! I have Ocarina of Time, Twilight Princess and the Wind Waker! How bout you? What games of LOZ do you own?

I have to admit, Twilight Princess is my second favorite Zelda game. But, my all time favorite has to be Ocarina of time. That one is a classic! Wind Waker is also a very cute one! Tetra is sooo adorable!

I also forgot to mention, a friend of mine gave me Spirit Tracks, and I love that one as well!

Hi! Plumbbobparadise here. Was browsing your fanons (which are great btw), and want to know how a few things were done so I could do the same on some of my pages. For example, the sims' skills and their relationships and the family tree stuff, like how can I link members of the same family together. I'm fairly new to this, so if you could help, it would be much appreciated. Thanks. :) Plumbbobparadise (talk) 13:34, June 12, 2014 (UTC)Plumbbobparadise

If I wanted to add, say, relations with other Sims and a family tree, how would I go about doing that? Plumbbobparadise (talk) 14:13, June 12, 2014 (UTC)Plumbbobparadise

Thanks for the help :) I'm sorry if I'm confusing you, but I was meaning the box you had on one of your pages where you had the other Sims and what their relationship is, like Good Friend, Best Friend, etc. I'm also trying to connect the members of my Sim family. I haven't done all their pages yet but I've got most of them done :)

Hello again! You suggested looking for the table button and I don't see it when I go to edit my page. I'm trying to add a skills tab for Savannah and another for a couple of her daughters and I can't find the button. The ones that come up are bold, italic, internal link, external link, etc. The 'more' tab has templates, wiki markup, and HTML. :( I'm even more confused than ever, if that's possible, rofl. Plumbbobparadise (talk) 23:34, June 14, 2014 (UTC)Plumbbobparadise

It will fix typos as long as I feed it pages that have typos. Currently I'm running a list of all fanons created on the wiki into the bot, not including recently created ones. --k6ka (talk | contribs) 13:49, September 17, 2014 (UTC)

Hi, I renamed some of your premade Sims fanon, e.g. Fanon:Bella Goth (TS3) to Fanon:Bella Goth (WayfinderOwl). Because of the high possibility that you're not the only one who writes fanons about premade Sims, you should try to make the title as unique as possible. At the moment, I only renamed your Goth fanons. Next time, try to follow this pattern. Thank you! Nikel Talk – Vote! 14:32, December 1, 2014 (UTC) 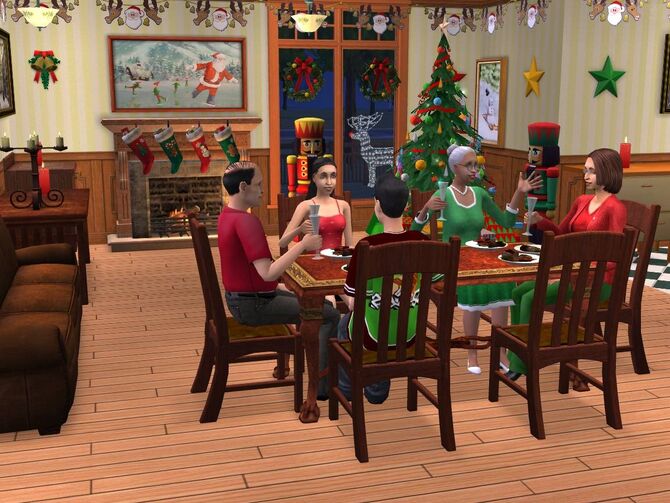 Hello WayfinderOwl! Thanks for all of your contributions to improve The Sims Wiki! Have a happy and enjoyable Christmas!
Image from The Sims 2: Holiday Party Pack

RE: Unsubscribing from the bot[edit source]

Yeah, it was a new thing I added to give users the opportunity to opt-out of these messages after noticing some people didn't really want those messages. So instead of being bureaucratic, I thought it would be appropriate to allow people to opt-out. Anyways, I've taken you off the list. Happy Simming! --I am k6ka Talk to me! See what I have done 18:03, February 9, 2015 (UTC)

You can create the fanon for her now, having {{Property}} attribute the fanon to you (for the meantime), and use the {{Info}} template to let other people know that the fanon originally belongs to her and that you are posting it for her because she is underage. Once she hits the golden age of 13, she should create an account, change the {{Property}} template to attribute the fanon to her, remove the notices, and continue working on the fanon from there. --I am k6ka Talk to me! See what I have done 20:57, February 9, 2015 (UTC)

We usually inform or warn users before blocking, so we would fill you in and let you know if there were any issues. Blocks are intended to prevent disruption, not to punish. --I am k6ka Talk to me! See what I have done 21:13, February 9, 2015 (UTC)

RE: Your message to AldoHyde[edit source]

Hi! I'm not AldoHyde, but I can give an answer to your question!

You use this code for example:

Without any links or text, it'll be:

If you want it on the right, use this:

Those two must be filled in above the image codes, so it'll show up correctly.

And this must be filled in at the bottom when you're done with the images:

To make it more clear for you, it must be filled in like this (for example):

Hope this helped you! :) Sims

Hello, WayfinderOwl. Actually, it's a custom content hairstyle made from Peggyzone, but unfortunately, that original website has been shut down. I'm not sure if I'm allowed to post a link to a hairstyle, though. Maybe you could still find that specific hairstyle in a different Sims 3 website that notes 'Peggyzone'. Wikierzz1122 (Let's talk it over) 02:46, December 16, 2015 (UTC)

My apologies for the late reply, but yeah, it's sad that your laptop has crappy memory. About Nikki's dress, well, I just download Sims with Custom Content from the official TheSims3 website, so it's hard to figure out where exactly the Custom Content item is. Well, the dress that Nikki is wearing is Custom Content. I'll let you know if I found the link. Wikierzz1122 (Let's talk it over) 09:04, December 25, 2015 (UTC)