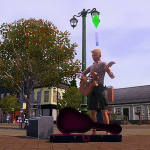 Re: Songs in Simlish Edit

Hi there. I noticed you left Duskey a message. I thought I'd just inform you he's been missing for... a long time. As for what to do with the page, I'd say include your info in the Songs in Simlish page. By the way, welcome to the wiki, and feel free to ask myslef or another admin if you need anything :) ~>ฬђ (tคlк ★ ς๏ภtгเ๒ร) 09:59, July 14, 2011 (UTC)

Thanks for your reply but I don't think the project I'm making doesn't fit with the "Song in Simlish" because there are songs that has no VOCALS.

Hi there, I appreciate all the work you have been doing around this area but adding a notice such as, "If you want to edit, please inform this user..." is generally frowned upon as anyone should be able to edit a wiki. I have removed your notice due to that reason and I'd recommend you make a copy of the article in your userspace so you can work on it personally. Thanks! Lost Labyrinth

Just wanted to give you a pointer when it comes to refrences on an article. You only have to add the reference tag with the site url once in an edit to an article. Otherwise the reference list becomes full of multiple links to the same site post. :)The Black Scorpion 17:31, December 6, 2011 (UTC)

Hi, I deleted your page because it doesn't warrant its own page, it is no needed to list the stuff one by one like that. the stuff that you add on the list is only ordinary stuff and that based from what we saw on the trailer so it still uncertain it will back or not. Thank you. Wiryawan310 08:35, December 8, 2011 (UTC)

Hello there, ThomasWikia. Thank you for your contributions. You uploaded images which weren't licensed, and I would like to remind you to add the proper licensing and categorizing. Thank you! ^_^ --RoseGui

Sure. ^_^ Auror Andrachome made this guide blog which explains how to license images and categorize them properly. Happy editing! --RoseGui

The guide shows how to license images you upload, as for the unlicensed images you find you can edit them and put {{Copyright by EA}} template. ^_^ --RoseGui

Hello! You can check this for a list of stubs in this wiki. Thank you for reading. --RoseGui

I'm pretty sure deleting all comments on the Talk Page of an Article is VANDILISIM! I suggest you do NOT do it again.The Black Scorpion 13:05, January 30, 2012 (UTC)

Oh, I'm flattered! ^^ Thanks for your compliment, ThomasWikia! That's really kind of you! :) However, I guess there's no really big point for me to be nominated again, since I've already got one, and there are still many potential editors in this wiki. And it could be you too! ;) Nikel Talk 09:33, February 7, 2012 (UTC)

Hey, I'm not sure if DanPin would be around to reply your message, but maybe you'd want to join in the newsletter forum in here? I don't know if you can, since I'm not involved with the newsletter stuff, but hey, it's worth trying. Nikel Talk 09:06, February 10, 2012 (UTC)

Hi there! Just thought I should let you know that your request for a permanent block rollback rights has been approved. Let me know if you need any help. Congratulations! :) Lost Labyrinth

I think I've made my fanon really long and detailed and I added the correct sims 3 template, but it won't let me add those little pictures on the side of things such as for the trait Artistic, I can't put the picture for artistic. Also, i don't know how to add a picture of my sim to the template without messing it up.

So how else can I clean it up? Because I've gotten that note before, and I followed the advice I got this time...so what's wrong?

Thank you & another q? Edit

I finally understand what template to use now! I have changed it and cleaned up, is it ok now? I hope my fanon is fine- the only thing is it won't show the little pictures for the traits, but oh well!

Is it ok now, can the cleanup be removed?

Hey! Just wanted to wish you a happy birthday. Hope you enjoy/enjoyed your day!

WIN (although it should be Green) MILK FOR THE UNYUUFEX, FLAT CHEST FOR THE CUTENESS THRONE, SKULLS FOR THE SKULL PROBES (user talk:Mathetesalexandrou) 15:39, March 9, 2012 (UTC)

Hello, there is a fairly important discussion on the Community Portal talk page regarding the seemingly declining activity from users and input/suggestions on how to solve this problem would be greatly appreciated. Thank you. Lost Labyrinth

I recall my Sim having level 1 in DJ skill in the Skills tab, so I guess it is visible. But let me check.

Dark Wave is a new music genre. And sure, will find what type. May update the template with the traits' icons.

Oh dear. I already did all the edits for you. Sorry... but anyway, will try to gather all the info I can get.

Here you go. All the info I can gather for all the traits from Supernatural. I'll try to find a guide (a very reliable one) which can give some more info.

Hi Thomas. I noticed that you renamed back Supernatural Hangout to uppercase "Hangout." I just want to tell you that lot assignments are named in lowercase, even if they're not spelled that way in-game, like Art gallery, Horse ranch, or Equestrian center. I guess this is kind of wiki-wide, except for traits. Nikel Talk – Vote! 05:22, September 10, 2012 (UTC)

Apologies, but I prefer to have upper-casing letters on each word.

Hey, just thought I should let you know that we have a page for reporting vandalism and whatnot with a form asking for the username and what they did (you can even add stuff like page names in wiki-code). The automated summary will say that you added a report, so an admin can easily pick it up. :) Lost Labyrinth

Thanks. For some reason I can't find it... until now.

RE: Found something Edit

I got it off google images when searching "Sims 3 Monte Vista".

I don't remember the specific site however. It's the same render as the one on the box art that is seen on the page, so i assumed it was official. -User:Dentface

You wish the page destroyed? MILK FOR THE UNYUUFEX, FLAT CHEST FOR THE CUTENESS THRONE, SKULLS FOR THE SKULL PROBES (user talk:Mathetesalexandrou) 03:24, December 6, 2012 (UTC)

Never mind, some other sysop took care of it for you. MILK FOR THE UNYUUFEX, FLAT CHEST FOR THE CUTENESS THRONE, SKULLS FOR THE SKULL PROBES (user talk:Mathetesalexandrou) 03:29, December 6, 2012 (UTC)

Re: Vandalism at Monte Vista articleEdit

Thank you for notifying me of the vandalism. I have noticed the Exe Xoxxaw one, but I haven't taken notice of the Hunger one. MILK FOR THE UNYUUFEX, FLAT CHEST FOR THE CUTENESS THRONE, SKULLS FOR THE SKULL PROBES (user talk:Mathetesalexandrou) 03:51, December 11, 2012 (UTC)

Sure I'll help. Oh, and I've also extracted the family thumbnails from Monte Vista. The problem is, I don't know which image belongs to which family. So I hope you don't mind if I replace your images afterwards... Nikel Talk – Vote! 05:49, December 13, 2012 (UTC)

Actually, I was thinking like you'd upload and add them to their respective family, and then I'll replace them. But if you want me to upload them and let yourself sort them, that'd be okay too. Nikel Talk – Vote! 06:10, December 13, 2012 (UTC)

Good idea, I'll let you know when I'm done. I wouldn't include the Monty and GilsCarbo families, as I've already uploaded them here. Oh, and I don't have the Sim thumbnails. Somehow, they only have small-sized thumbnails that can't be used here. :/ Nikel Talk – Vote! 06:40, December 13, 2012 (UTC)

Is this account yours? For some reason I suspect this account isn't you. MILK FOR THE UNYUUFEX, FLAT CHEST FOR THE CUTENESS THRONE, SKULLS FOR THE SKULL PROBES (user talk:Mathetesalexandrou) 22:45, December 25, 2012 (UTC)

It belongs to a long-term sockpuppeteer. I've perma'd the account. Lost Labyrinth

Thomas, I've edited one of your comments on this blog because it violated Wiki Policy; specifically, it attacked another user. Please watch what you post and remember to be friendly towards other editors, even if you disagree with them. Please do not allow minor issues like poor grammar to upset you.

I asked some questions on Talk:The Sims 3: University Life but since the edit history shows you're the one that did what I'm asking about, I figured I'd ask you directly as well. Namely, I'm talking about {{The Sims 3: University Life/Detailed features}}... in short I'm a bit confused as to why that page was created. Do you think you'd be able to explain why you chose to create a separate template? Please respond on the TS3UL talk page if you can. Thanks. -- LostInRiverview talk ~ blog 07:02, January 10, 2013 (UTC)

I just realized this. Could there be any reason why you put it under Template: namespace? Using the mainspace, i.e. The Sims 3: University Life/Detailed features (now redirect) seems to be more appropriate like this, as it's part of the main content. Nikel Talk – Vote! 07:57, January 29, 2013 (UTC)

It seems more appropriate then. Thanks. I'm not that professional in Wikia.

It is more appropriate to put it as a subpage, and as such, we can link it from the main article (specifically via the Features section). I don't think we need a template for that.

I seen you are uploading pictures of university life. Is there a main video going on or are these off the internet? -- DevlyHallows ~ (Inform me here) 11:04, February 14, 2013 (UTC)

Haha, I almost forgot this community. Thanks guys!

I see you've been gone recently too, and I kinda miss you around. :p I hope you can get your exams done well, because recently I've been gone too due to exams, but I might return tomorrow.

Here I am, now I've returned again! :) Personally, I have mixed feelings towards The Sims 4. In some way I might be a little excited, but I also got worried. I have more worries than excitement feelings though. I've read over ModTheSims that a user named FREEDOM_55 got the chance to get a trip to EA Salt Lake studio. I read a lot there. This is not to sum them up, but in one of her points, she mentioned that The Sims 3 game engine actually has limitations, and specifically Late Night and Island Paradise actually pushed the engine to its limit. This means that The Sims 3 couldn't really handle anything that's completely new, and the developers found it very difficult to tweak the core game. They consider The Sims 3 game engine to be "old" already, and it's a little bummer seeing that it makes it impossible to make a great innovation as a new core feature for the game in an EP. With The Sims 4, I wish this becomes the consideration so they would build the game engine to be strong enough to facilitate the future expansion packs. Hopefully they'd do this and I'd be relieved.

There are two main things come to my concern, among many others. :/ One is the computer spec. My current laptop can't even handle The Sims 3 smoothly, not to mention The Sims 4? Second, with a new game, it means there will be a drastic change / revamp and major updates to this wiki, and I really hope we editors cope with it.

Hello. I am contacting you to make you aware of a recent decision that was made by the administrators, to allow rollbackers to use the {{Warning}} template. Please read this blog for more information on this decision and how it affects you. If you have any questions regarding this, please contact me or another administrator. Thanks! -- LostInRiverview talk ~ blog 01:24, November 5, 2013 (UTC)

Retrieved from "https://sims.fandom.com/wiki/User_talk:ThomasWikia?oldid=545523"
Community content is available under CC-BY-SA unless otherwise noted.