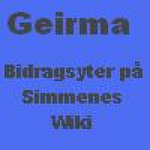 Hi, and welcome to The Sims Wiki, Geirma! Thanks for your edit to the Mortimer Goth page.

I see you are being active and adding new articles about characters to The Sims Wiki. That's really cool! =D

While you add, I improve them with infoboxes and stuff; but since I don't play The Sims 2 anymore, could you take screenshots of the faces of the persons you create an article for? That would be really good; I could add them to the infoboxes! Keep up the good work. =) --- Rodrigo X 13:05, August 7, 2010 (UTC)

I made the articles for the NPCs from this list, which lists most of the premade NPCs in Pleasantview. Also, this page list every sim in Pleasantview, with head shot, English name, and French name as it is a French page.
--Geirma 15:48, August 7, 2010 (UTC)

I think everything should have an article for it. Even minor NPCs, so this wiki can be as most completed as possible - that's a goal (hey, sure that not every less-than-mirror thing has to be here, but those NPCs aren't that minor). I disagree with deletion. Oh, and before discussing any further, since you, Dharden, are the proposer for deletion, create a section at the candidates for deletion page so we all can discuss about it together. Peace. --- Rodrigo X 13:58, August 7, 2010 (UTC)

I think you're right. Edit

I think the pets in Category:Riverblossom Hills pets are strays who appear in all neighborhoods, but I don't think it's a complete list. Dharden (talk) 14:30, October 3, 2010 (UTC)

Retrieved from "https://sims.fandom.com/wiki/User_talk:Geirma?oldid=520357"
Community content is available under CC-BY-SA unless otherwise noted.