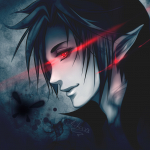 Please leave a message if you want!

It may not be an in-game screenshot. I'm not certain, but to me, it looks like it may have been made by using SimShow to display the Sim's body and head skins, then taking a screenshot. It's been long enough since I messed with SimShow that I don't remember all the ins and outs of using it -- and I'm not sure where you could find it. Dharden (talk) 04:54, February 28, 2013 (UTC)

Thanks i found it.

Yes i suppose. Do you think i should have made it smaller?

Hello Fangirl, thanks for your kind congratulations. I'm going to try my very best with the new rights that I was given - I found it really sweet when you were thinking of nominating me. Maybe, one day you'll be able to have the rights too - thanks again! HanaGoth96 (Neigh...?) 16:20, March 25, 2013 (UTC)

I really appreciated your nomination but I declined it. The thing is Fangirl, I have convinced myself that I would nominate myself around about 2000 edits, so that way through my edits I can learn more about the way the wiki works (although others seem to think that I'm ready, I deny that I am ready yet). But, Fangirl, I am really thankful for your nomination and I am glad that I... how to put this... had an impact on your wiki experience (if that makes sense...). Once again, thank you for your thoughtful nomination. :3 HanaGoth96 (Neigh...) 07:27, April 29, 2013 (UTC)

Thats A-Okay with me, I'm going to be retiring forever i may come back when the Sims 4 comes out! XD hope to see ya around Hana!

Seems you've decided to renege on your retirement claim. Welcome back, and given the positive feedback you've received on your Fanon, with a bit of more love and effort you might just get your own featured fan fiction! (I for one should push harder on my own work QQ) MILK FOR THE UNYUUFEX, FLAT CHEST FOR THE CUTENESS THRONE, SKULLS FOR THE SKULL PROBES (user talk:Mathetesalexandrou) 22:34, August 1, 2013 (UTC)

I was like, huh? Who is she? Why does she contact me? But you are from the fanon about Don! I'm fine, I have holiday right now. I love it! And what about you? How are you doing? (maybe put an abandoned temlate above your fanon about don?)

About what I said in chat... Edit

Guess I really do help. XD

A post in this thread indicates that this object from Happy Holiday Stuff plays carols and dances. It sounds more like a musical decoration than a stereo, but I don't have HHS, so I don't know if it also functions as a stereo. BTW, thanks for adding the pics of the TS2 stereos. Dharden (talk) 20:27, August 15, 2013 (UTC)

Articles such as List of Sims from The Sims were deleted based on the outcome of this forum. If it's been deleted in the past as being redundant, please don't recreate it. Thanks! Lost Labyrinth

Oh, ok. Is there anything you need me to do with the fanon, like writing your chapter or posting a notice that your chapter will be late? Me!-Bwahaha! 22:02, August 19, 2013 (UTC)Hurshbr

A link to a conversation between me and Spellcaster Jr that might interest you:

Hey jr! Here are the details you asked for: Terrafell exists in the Middle Ages. The world itself is called Terrafell, with three layers of heaven (Purgatory, Asguard, and Heaven) above it, three layers of hell (The Void, Hades, Hell) beneath it, and spirit worlds to the side. Terrafell has mythical creatures and magic in it, and there are SO many racial options I can't tell them all. You can be anything from an assassin to a doctor to a farmer to a wizard to a paladin and beyond, you have a full range of things to do, and it's totally boss. My brother actually invented it. To make a character sheet, create a fanon page of your character on here. So, that's that! It's not all of it, but most of the crucial details. I hope you decide to join us! Me!-Bwahaha! 00:52, August 22, 2013 (UTC)Hurshbr

Reveal of the Murder! Edit

I've nominated you for rollback rights here. Note that you are not obligated to accept the nomination and may decline it if you wish. Whatever you decide, please go to the Requests for Rollback page and reply to the nomination. -- LostInRiverview talk ~ blog 23:16, September 24, 2013 (UTC)

Thanks guys! I really appreciate it. :) Fangirl(Go ahead! Talk! • Don't even bother looking here.)

Thanks Chunky! Haha! Thanks Math, I guess you're right! ;D Fangirl(Go ahead! Talk! • Don't even bother looking here.)

Don't worry, its nothing! ;) Fangirl(Go ahead! Talk! • Don't even bother looking here.)

Hello. I am contacting you to make you aware of a recent decision that was made by the administrators, to allow rollbackers to use the {{Warning}} template. Please read this blog for more information on this decision and how it affects you. If you have any questions regarding this, please contact me or another administrator. Thanks! -- LostInRiverview talk ~ blog 01:24, November 5, 2013 (UTC)

RE: Miss Me? Edit

Hmmmm...Well, I've got a TON of writing stuff on my plate, like Grandma Muse came over for the weekend, so my updates would be infrequent. But, because I love working with you, I shall do it! So. What's it about? The Raven - Nevermore 02:10, May 7, 2014 (UTC)Slade81

Glad you loved the pandas. So, Romance-Comedy-Drama. First thing that comes to mind is Friends, shortly followed by How I Met Your Mother and the ilk. Buddy comedies with a few sad episodes and two of the buddies invariably end up together. Does that sound good? I've been kicking around the idea of a buddy comedy staged in either the suburbs or an apartment building.

Another unrelated note: Can our fanon studio title be Panda Towers Productions? :3

Hmununununummmm... If we stage it in the suburbs, like, Twinbrook or Sunset Valley, we can name it after the street they all live on. The Raven - Nevermore 17:31, May 7, 2014 (UTC)Slade81

Appearance of the Lovely Mac Edit

In a matter of Panda Towers Productions, we're still working on the wardrobe of one of our starlets, Mackenzie. We've got her Formal, her Everyday, and her Sleepwear made. For her Athletic, I was thinking T-shirt and regular pants, with socks and sneakers. For her swimwear, a simple white bikini. And for her outerwear, a white sweatshirt and tight brown pants with boots. Is that all okay? The Raven - Nevermore 20:17, May 7, 2014 (UTC)Slade81

They look great! Next on the to-do list is just creating more templates for people. Did you see all of Mackenzie's memories? They're not finished, but all the important ones are there.

Nah, Mac will be fine. She's that kind of indomitable person. :) So, Miss Goofy Lady is called Brianna Few, her traits are Easily Impressed, Inappropriate, Good Sense of Humor, Excitable, and Dramatic. Her zodiac sign doesn't matter, her favorite music is Hip-Hop (or Rap if you've got that stuff pack), her favorite color is orange, and her favorite food is cookies. She's got blonde hair and blue eyes, freckles, light skin, and is thin.

As for your other question, various ways. Perhaps the romantic guy just goes around meeting all the neighbors when he first moves in (Mac lives on their street before anyone else), Brianna meets them in a plan for an episode I am hatching...And I dunno about the last guy. Panda Tower Co-President Slade, AWAY! The Raven - Nevermore 01:31, May 9, 2014 (UTC)Slade81

I think Shawn and Mackenzie should end up together after a whirlwind relationship, like Ross and Rachel. Key points of their relationship:

Does that sound like a good overall plot? Gotta go now, chances are I won't come back tonight but hopefully I will.

OH MY GOSH! Just looking at Adam reminds me of Ross and Chandler. I can't wait to get all these guys developed so we can start writing. Oh, by the way--we don't have to create the pages for all of the characters' families/old friends/exes, not until you have to meet them in-show. And for all of Shawn's girls, you can just pick random women from Starlight Shores to save time. The Raven - Nevermore 03:06, May 9, 2014 (UTC)Slade81

Yeah. I have a really good feeling about this series! And if you've ever watched Family Guy or Bob's Burgers, Brianna is sorta like Peter Griffin or Linda Belcher--always up to something, usually impossible. :D The Raven - Nevermore 20:22, May 9, 2014 (UTC)Slade81

She looks fantastic, comrade. The one thing I would change is in her sleepwear--instead of the jersy, can she have one of the cat sweaters from Pets? They seem like the kind of thing she'd like. The Raven - Nevermore 21:49, May 11, 2014 (UTC)Slade81

Firstly, Shawn's memories are plentiful already. Very detailed. It seems that everyone in this story is fresh out of college (that's a good thing)! Sadly...No one finished. Anywho, we've gotta come up with a plot for the first episode before we can name it. In the first episode, maybe Shawn, Adam and Mackenzie can all meet? (my plan for how Brianna meets them requires a specific storyline).

M'kay. I'll be getting off of the computer for this evening, but I'll start thinking of possible writings.

By the way, in Mack's memories, was it clear that she got over Caleb BECAUSE of the twins? I positioned her loss of love for him directly after their births. The Raven - Nevermore 02:28, May 12, 2014 (UTC)Slade81

Well, tomorrow (or maybe later today) I'll have access to my copy of TS3, so imma look around and see where they are in the neighborhood so we can get a whole list of possible names. I like options. :)  The Raven - Nevermore 20:43, June 2, 2014 (UTC)Slade81

From Legend of Zelda! LOL. I actually loved Navi. She was funny and cute. Though, to me the worst noise will always be the minibolins. (Or whatever they are called) from Wind Waker. That noise will haunt me for the rest of my life. Du-nu nu nanana da da na-nanat na na na du-nu nu na na YA! I hate those little things so much!

All of them since Ocarina of Time and Majora's mask. I got into Ocarina of Time when it came out for N64, and have followed the series since. Twilight Princess is my favourite. WayfinderOwl (talk) 05:29, June 1, 2014 (UTC)

How does that sound? I picked Oceanview Drive because there are lots of houses the right size on that street. We'll just have to do a little evicting. The Raven - Nevermore 04:37, July 15, 2014 (UTC)Slade81

First, I have a few questions for you.

Do you have any mods, and what are the nature of said mods?

Are you comfortable with downloading pose packs?

Do you know who would live in what house?

I don't know. Maybe you could just randomize it, and edit the house a little. Thanks for the pose pack thing! It'll help a bunch with the pictures. 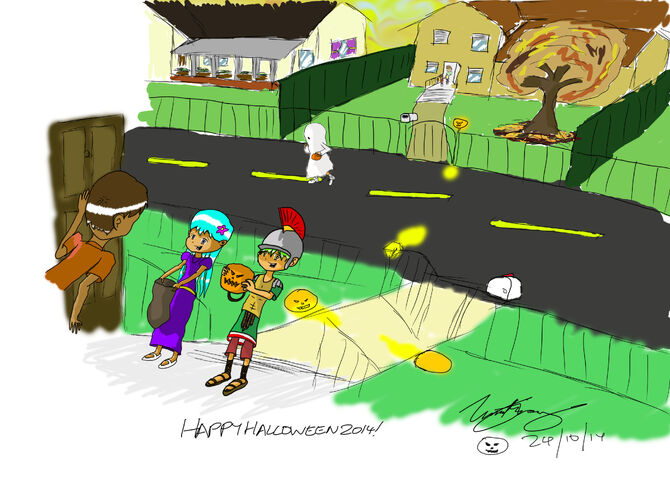 Hello Fangirl4545! Thanks for all of your contributions to improve The Sims Wiki! Have a happy and enjoyable Halloween!
Image credit: WikiBuilder1147

Hello Fangirl4545! Thanks for all of your contributions to improve The Sims Wiki! Have a happy and enjoyable Christmas!
Image from The Sims 2: Holiday Party Pack

Retrieved from "https://sims.fandom.com/wiki/User_talk:Fangirl4545?oldid=786803"
Community content is available under CC-BY-SA unless otherwise noted.