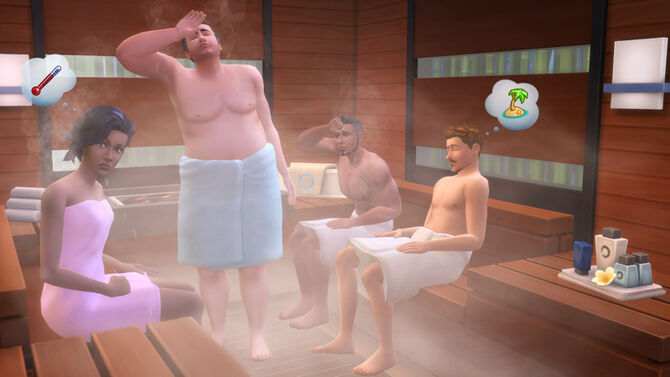 So... hopefully we all got over the American patriotism and Canadian awesomeness this past week. Let's end this patriotic week and start off the next with some non-patriotic stuff, say, The Sims?

If Outdoor Retreat was a disappointment for you, no worries, for EA has come up with another so-called "game pack": "Spa Day"!

...ehehe. Yeah, I think they need to work on the names a little.

Spa Day will be coming out later this month and will allow Sims to relax and use (*cough*) spas! If you liked spas from The Sims: Superstar, saunas from The Sims 2: Bon Voyage, or general spas in The Sims 3, well glory be, it's finally coming back![1][2]

And speaking of Spa Day... the box art will always leave a disturbing image in my mind.

A new patch is scheduled for July 9th, and with it brings lockable doors and half-walls,[3] something that has existed since The Sims 2, carried forward into The Sims 3, and was apparently left out of The Sims 4 for some reason. Oh well... at least they're coming back, right?

It's Time to Celebrate #SimSummer!

If you like summer, chances are, you'll like this offer! The Sims team is offering special The Sims 4 goodies to equip you for this summer, including a beach towel, sunglasses, a lanyard, and a reusable water bottle. All with The Sims 4 logo on it! Ready to make your friends jealous?

To get your hands on the loot, monitor The Sims Instagram and Twitter pages and get ready to take some screenshots in your game! Each week, there will be a new theme, and your job is to get a picture of your Sims that match the theme! For example, if the theme was "hot tub", send your pictures of your Sims chilling in a hot tub with the hastag #SimSummer and hope you win! Doesn't matter what game you get your picture from, whether it's from The Sims 3 or The Sims 2... heck, The Sims 1 will work too! You can also submit selfies, drawings, fan-art... let your creativity go wild! (More info)

There are numerous community discussions that could use your feedback! I've picked out the ones that really need your participation! Please do not be shy! We are, after all, only human, and we need not be ashamed of our mistakes.

The next round of battles have begun! Let's great straight to...

Enter Daniel Pleasant. Father of two, husband of one, and a boyfriend of yet another. Daniel only wanted Mary-Sue for her love, but Mary-Sue seems happier marrying her computer at work than she is even looking at Daniel in the eyes. His two daughters are no better. One gets straight As and is well loved by the family, while the other is coldly neglected and can barely keep herself together. Both are always fighting with each other, furthering the division in the family. To satisfy his thirst for love (and WooHoo), Daniel made out with the family's hired maid and seems happy in his affair, with Kaylynn being a lot warmer and friendlier than the spouse he is legally married to. Man, it feels so bad, but it feels so good at the same time. Maybe he'll regret it later. Maybe...

On the other hand, we have Geoff Rutherford. Geoff, unlike Daniel, is free from the chains of commitment, and just wants to party, ending his lust-filled days with a steamy night under the covers. Mmmm... guilt free! But his roommate, Connor, wants those WooHoo-filled, commitment-breaking, dishonest parties to end so he can start a family of his own, something that both Geoff and Daniel dread, and it's not hard to see why. But is Connor right? Should Geoff really just stick to "real love" and settle in, or should he just continue to rob other Sims of their virginity?

Which one of these two Sims do you prefer? It's people like you that run our battles and determine the winner — vote now!

If there's something I really don't want to do that everyone and their grandmother seems to want to try out, it's time travel. Messing with the space-time continuum, I'm afraid, might compromise my existence. So I'd rather not tamper with it. That doesn't stop some daring Sims from trying it though!

Take Mathetesalexandrou's Time Paradox, for example. In a nutshell: Sims from ancient civilizations travel through time and settle into the future. Tension arises as romance brews, and enmity is brought to those affected. Can you get your mind around the mess that results after a rift in the space time continuum?

Or how about something more localized? Shattered Dimensions goes back to the story of Mortimer and his vanished wife, Bella. To find out what really happened to his beloved wife, Mortimer, a retired scientist, decides to build a time machine to go back and see for himself. Maybe it's better if he didn't...

Which one of the two do you prefer? It's people like you that run our battles and determine the winner — vote now!

The Sims Wiki is run entirely by volunteer users and we're always looking for people to step up and help out. You can help out in more ways than just editing. How about trying your hand at writing a news blog? Or, if you're experienced enough and meet the requirements, consider stepping up and requesting new user rights!

Retrieved from "https://sims.fandom.com/wiki/User_blog:K6ka/The_Sims_Wiki_News_-_5th_July,_2015?oldid=677193"
Community content is available under CC-BY-SA unless otherwise noted.