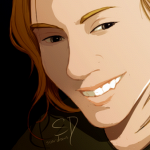 SoaringDragon is a female WikiDragon born on the cusp between Capricorn and Aquarius and thus has a mixture of traits from both signs. In her early years, she thought she was a Snake according to the year listings of the Chinese Zodiac. She later learned that, because the Chinese year follows the lunar cycle, she is actually a Dragon. In her human form, she has long blond hair, easily burnt, pasty white skin, and color-shifting gray eyes that turn blue or green depending on the lighting, clothing, and mood. Her name originates 7 years ago on the Maple Story Sea forums and almost every instance of it can be attributed to her. Her most common nickname is "Soar".

Soar is currently attending a small university in pursuit of a Bachelors of Science degree in a Computer Science with a Graphic Design Minor. She received her Associates of Science in August of 2010. She has a fair amount of experience with SimPE, although an embarrassing lack of knowledge about how to create mods. However, her strong background in web design, which includes Javascript, HTML, CSS, and some PHP, creates a strong foundation for her editing prowess. She also has an extensive knowledge of Photoshop and, outside of web design, she knows rudimentary programming in BASIC and C++. Unfortunately, she currently lacks Java and IRC skills.

As an member of the subspecies wikidraco anglica, her native language is English and her written fluency is above average. The closest she has to a second language is Japanese as she has devoted several years (although not consecutive) and knows about 300 漢字 by heart. At one point in her life, she was devoted to learning Swedish. However, that has fallen into disrepair with the loss of her reason for learning it. She knows bits and pieces of Spanish but not enough to make a coherent sentence with. Her French is even worse, although she knows some words by proxy (English is full of them).

Retrieved from "https://sims.fandom.com/wiki/User:SoaringDragon?oldid=799981"
Community content is available under CC-BY-SA unless otherwise noted.