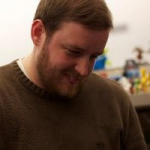 Lifelong gamer, writer, and all around obsessive geek, I've previously worked as an editor at 1UP and GamesRadar, in addition to freelancing for a bunch of sites and other magazines. Some of my favorite games are Dark Souls, Earthbound, League of Legends, Street Fighter, and any Codemasters racing game. I'm also a huge music and film nerd as well, so don't hesitate to holler at me about those things either!

Retrieved from "https://sims.fandom.com/wiki/User:Pseudobread?oldid=588671"
Community content is available under CC-BY-SA unless otherwise noted.