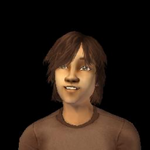 I have been playing The Sims since the first game. I was actually rully little when I played Sims 1. The kids that babysat me introduced it to me, and me and my little brother fell in love with it. We used to play it constantly until we got in a fight over it and my dad snapped the disk in half :( Now I play The Sims 2 and The Sims 3, but I prefer Sims 2.

I am obsessed with the Maxis storylines, and rarely steer away from them. I usually don't make very many custom families because I end up never playing them. I do have one family in Pleasantview, though, called the King family, and I love playing them. The family consists of Gary King, Steph King (née Greenfield), and their daughter Quinn. They have progressed a lot. Gary and Steph had another daughter named Alicia. Gary cheated on Steph with Brandi Broke, and so now they got a divorce. Gary has already remarried to the maid, Lucy Hanby. He was going to marry Brandi Broke, but he left her at the altar. Quinn is now a teenager and is dating Alexander Goth.

Other than The Sims, I enjoy playing guitar, listening to music, writing, drawing, and having fun. I laugh a lot and I am a very outgoing person. I love The Muppets, Disney, and Pixar. I get obsessed with things easily, and so I go through many fandoms. I love movies, in general. And, yeah. I think that just about covers it all.

Retrieved from "https://sims.fandom.com/wiki/User:NY22Giants22?oldid=718953"
Community content is available under CC-BY-SA unless otherwise noted.