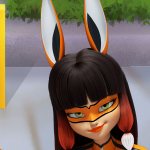 I play soccer or sometimes dance in the free time. I love to draw and to paint, mostly by hand. On Computer I like more to paint, but I'm not very skilled in drawing anything as from hand. I enjoy listen to music, I love to write stories or fanfics, playing videogames (Mostly Sims, Grand Theft Auto or Need For Speed) , sometimes I watch TV, but since the most shows I loved to watch are gone, you rarely see me watching TV.

I'm from Portugal, but I live in Switzerland since Toddlerhood. I'm from Coimbra, but got a slightly northern dialect, because my father is from the north and my portuguese teacher and the most portuguese from the class were from the north too.

World I own Edit

Humphrey and Kate from Alpha and Omega.(Canon)

Hans and Anna from Frozen. (Canon/Fanon)

Adrien and Kagami from Miraculous (Fanon)

Retrieved from "https://sims.fandom.com/wiki/User:Mollymolata?oldid=802110"
Community content is available under CC-BY-SA unless otherwise noted.