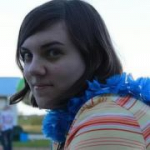 A Brief History of Myself, Centering Mainly Around The SimsEdit

Hello! I'm Jenny LaVada Harris. I've been a fan of The Sims series since 1999. Wow, has it been that long? Of course, back then, having plunged wholeheartedly into the Sims world through The Sims Deluxe Edition, I had no idea what I was doing, let alone what the eventual result would be.

I still have no idea what I'm doing, but I've come to enjoy the feeling, and I learn something new nearly every time I play with my Sims.

The early 2000s were so long ago, I'm having a hard time recollecting what I was doing with my first Sims. I do remember having a heated conversation with my father involving the Unleashed expansion pack (he though the title meant something...different). And I remember the little purple genie who muttered such interesting Simlish phrases, it was positively spellbinding. And even to this day, I remember the Zydeco music emanating from Old Town.

Oh, where to start? OK, here. I first attempted to install The Sims 2 on my parents' dinosaur Windows 98 computer. I believe the framerate for normal gameplay was somewhere around 0.4 FPS. Not playable.

Aha, but then we got a new computer! Joy, rapture! The FPS shot up like a bullet, and all of a sudden I could play the game! And I did. Oh, I did. I never really understood the whole Cassandra-Don relationship. And who would build a pool without a decent ladder, Brandi? But Veronaville and Strangetown were fun, too, and I wanted to find out how to make alien Sims...hm, there must have been some way. (I eventually discovered boolprop testingcheatsenabled.) Before that, though, I remember making a Sim - Simone Tachiavelli - whom I was very proud of. Then she died of starvation shortly before childbirth. And when I was able to get the Resurrect-O-Nomitron for her, I subsequently discovered what zombies were like. Serves me right for being cheap!

At first, I was inexplicably opposed to The Sims 3. I think it mainly centered around my knowledge that it would of course be vastly different than The Sims 2. The question was, different good or different bad? I had a Mac, and was thus very pleased to learn of The Sims 3's native compatibility with Mac...or whatever it was pretending to be. After a few test runs, I discovered that Sunset Valley really wasn't half bad! I'm especially fond of Connor Frio and Agnes Crumplebottom. I can't help but pair them up pretty much every game, though it's especially hard to even get them together, given their traits. I'm also a fan of the Bunch family and the omnipresent Goth family.

In some ways I [strongly] feel that The Sims Medieval belongs in a seperate category from The Sims series. That said, I still enjoy playing it an customizing the characters' outfits. And who can resist the Pit of Judgement? I mean, do any of us really know what the Pit Monster is? Do we really want to know? Do we care?!

Retrieved from "https://sims.fandom.com/wiki/User:Jenny_that_girl?oldid=431880"
Community content is available under CC-BY-SA unless otherwise noted.