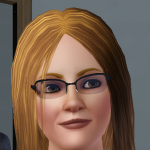 My discovery of The Sims happened in 2007 (maybe 2008, I can never remember anything) when I went to a second-hand gaming store to trade in some old Xbox games. Seeing the console version of The Sims, I grabbed it, and from then on, you couldn't get me out of the basement.

A little less than a year later, my mom brought home a computer game with the words The Sims 2 Double Deluxe written on the cover. This time, it wasn't only me who was addicted. My best friend Alicia and I made so many Sims, we filled up a whole 3 custom towns. I only ever played the pre-made ones by myself, and to this day I still miss all of Sims.

What happened? Well, our computer crashed, so we upgraded to a Mac. Now, I love our Mac, being it's so high-tec and powerful, but it lacks one thing: The ability to play The Sims 2. Since all of my now-ancient The Sims 2 games are PC-only, I've been forced to look elsewhere.

I bought The Sims 3 in 2009, when we still had our PC. Immediately hated it. Couldn't grasp the controls, disliked the looks of things, and went back to playing The Sims 2. Now, I play the Sims 3 only because it's Mac compatible, and I suppose the graphics are much better.

Don't even get me started on The Sims Social, however. Utter failer, utter disappointment. Call me back when we get to have The Sims on a CD with online capabilities (Spore did it! Oh, yeah, I have that too. Love it!)

This is a detailed section all about me. If you don't like it, or find it boring, go complain. That's what the internet is for!

My name is Caitlin, and I am a teenager from a small town in Ontario, Canada. I hope that doesn't give out too much information.

I am currently pesco-vegan (No meat except fish; and no animal by-products such as milk) and I blog about healthy eating.

I recently converted to Christianity, but I am still very tolerant of other religions. Live and let live, right?

I owned 2 dogs and 3 cats until July, when my baby Smokey had to be euthanized (she ran away, and when she came back she was really sick. We think it may have been rat poison). I miss her everyday, but I'm just happy she isn't in pain anymore.

I have an obsession for toast, and I love grilled cheese (made with soy or non-dairy cheese). Just because I'm Canadian does not mean I drink maple syrup by the bottle.

I also just lost about 30lbs from intense dieting and exerciseing... but since I've become re-addicted to The Sims, I have to hope I won't put it all back on.

On a lot of other wikis I've contributed to, there is a photo limit. If this wiki also has one and I've gone over it, please let me know immediately before you delete this gallery or flag my profile, thank you!

Retrieved from "https://sims.fandom.com/wiki/User:EntreHiver?oldid=315488"
Community content is available under CC-BY-SA unless otherwise noted.