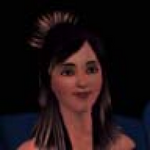 Emily Armstrong is a brave woman/sim (although ingame she does not have the Brave trait) who is daring to test the limits of Simanity by being one of the chosen few to undertake the 100 baby challenge while focusing on her career as a 5-star chef and skills (she's a rebel who did NOT follow the rule that women who will take this challenge are not allowed to work), being an ambitious woman. Furthermore, she is also a flirt and thus sees this quest as an opportunity to be able to WooHoo with different men, knowing that one of the rules of the 100 baby challenge is that the fathers must be different for each baby, except for twins and triplets. When not focusing on work and procreation, she is here to edit articles on Sims Wiki.

Disclaimer: She is NOT in any way related to Billie Joe, Neil and all other notable people with the last name 'Armstrong.'

Progress so far in the 100 Baby ChallengeEdit

In chronological order, here is a tabulated list of all her children so far and their fathers.

Retrieved from "https://sims.fandom.com/wiki/User:EmilyArmstrong?oldid=258605"
Community content is available under CC-BY-SA unless otherwise noted.