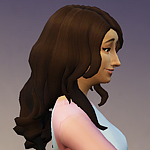 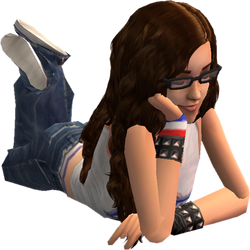 Greetings my fellow visitors! This is Breira. Well, actually, I never used this name before, but I wanted to use something unique now, not my real(ish) name. I kinda like it, just made it up last night when I decided that I'm going to register onto this site. It's exciting! Now I can upload my sims on the Internet! Yaaay! Wow, I can be easily amused by the little things I guess... Anyway I'm so-so-so happy that you're here, on my page, and if you are still reading this go >>HERE<<. She is my very first Sim whom I uploaded. Isn't she lovely? :) By the way, this paragraph was meant to be an introduction... I think I nailed it :P

My Story with The Sims SeriesEdit

It all happened back in 2001. I was 7 or 8 years old, when I got my very first computer! Well, it was my brother's used computer, because he got a new one and I inherited his old one so... but anyway I was excited because guess what? My brother installed The Sims right away. I loved playing with it, I loved to control lives. Yeah, it sure does sound wrong, but that's why we play with these games, right? :D

My very first sim was wearing a pink dress and had black hair. I built her a big house with pink floor but I did not painted the walls because I run out of money and I had no clue wath a 'cheatcode' is. But then I was using 'kaching' and 'motherlode' all the time :D I don't remember much of this game, because as I mentioned, I was very little.

2004 was the year when The Sims 2 was released. I headed to a store with my parents right away and I got it. My 4 CD'd version. Yay! Unfortunately I don't remember my very first sim I created. Actually something happened to my computer, it broke and all my Sims savings were gone... *sigh* It was back in 2006 (?) so... Anyway I started all over again and I created a new neighbourhood (before that I was playing with Pleasantview and Strangetown mostly, somewhy I wasn't interested in Veronaville), i choose Bluewater Village and I named it… guess what? Yeah, that’s right: Bluewater Village. I’m so creative! And I created a sim. I named her Petra. She met Corbin, they got married and then they had children. Pretty ordinary, huh? Yeah, they had 10 children to be more precise. This family populated the whole town and more! They were a huge family with lots of drama, lots of cheating, lots of illegitimate children leading up to 5 generations.

2009. I was a highschool student back then. And The Sims 3 was released. I wasn’t THAT excited, because I loved playing with Sims 2 but I was curious. I tried it, but it was… different. The sims looked odd to me. Looking back I might have been prejudiced about the Sims 2, but I spent 5 years playing with it. What 5? I was still playing with it in 2012! That’s heavy, I just realized this :D
But in the summer of 2012 I installed The Sims 3 on my very new computer and I created her. She is based on me, in contrary with my first sim in the Sims 1 and my first-sim-I-remember in the 2nd game. Those sims were Chinese or Japanese looking ones. (I just realized this right now too! :D)

So… this is it! I’m still playing with the Sims 3 and I just never get bored, I always find something new, I always create a story for my sims. My brother just doesn’t get how is this possible because it’s always the same. They born, they have kids and then they die. Well, that’s life actually. And I just love controlling lives. (Mhaha!)

„After all this time?
Always.”

I don’t know if the universe hates me or just wants me to do something else with my life, other than play with sims, but why universe? Why?!

Waitwait! Let me start over.

In 2014 The Sims 4 was released and I rushed to the store as fast as I could and bought it. Yeah! I spent over an hour to make my very first TS4 sim, Naina Bell (who was supposed to be of Indian heritage – I don’t know what’s up with me and Asian-looking firstsims, that’s my thing I guess, heh).

Naina was supposed to marry one of the townie sims (cause that’s also a fascinating tradition of mine) but I just couldn’t find anyone good enough for her. So for the first time in my simming career I created the main guy character for the firstfamily as well. Ricky Rey.

And I loved them. I even built them a house and it did not turn out bad at all. No, everything went smoothly. They got kids, grandkids, all the good stuff. And then. AND THEN! And then Windows 10 happened. And for some reason I can’t play anymore. Cause my computer shuts down every time I try. I haven’t been able to play since almost a year now. I think you understand how much of a tragedy that is.

At least autocad and photoshop runs (sort of) which I need for university and stuff, and I could finish a lot of my projects and can concentrate on my life instead of virtual ones. Yeah, hurray. I am a functioning and responsible human being now so thanks universe for that. Not!

Retrieved from "https://sims.fandom.com/wiki/User:Breira?oldid=738835"
Community content is available under CC-BY-SA unless otherwise noted.