Urangoo McBain is an Urb residing in Urbzville's district, Central Station. He is the resident bully and one of the game's villains. As McBain tries to muscle in on Urbz occupying Central Station, Cozmo Street, and Diamond Heights, the protagonist has an opportunity to 'defeat' him by performing Power Social moves. During a midnight party, Darius will give the protagonist 'Stink Bombs, Power Chords, and XAMShots' to use on McBain. Once defeated in each district McBain will abandon it and eventually never return.

McBain likes Tattoos, piercings, scars and Causing as much pain on the outside as he feels on the inside. He hates rockstars, fashion models and "pretty punks."

In the comix by Evan Dorkin, McBain loudly bursts through the tattoo parlor and demands to be serviced. Jayde, a newbie, snaps at him and tells him that there is a line but she is quickly hushed by her fellow Urbz who state that the man is someone not to messed with. As Kidd tries to explain more about the trouble-maker McBain, he is 'head butted' by him and is knocked to the floor, which then McBain puts one foot on his chest. Scary Mary stands back worried about him as it appears head butts by McBain are a common occurrence.

McBain announces that he wants to become the 'dream guy' to a woman named Anna Kissed, this job was demanded to be done in two days leading to a lot of tattooing and piercings. Mary becomes agitated and brings up the fact that McBain wouldn't pay for the session even if they could do it. McBain threatens to headbutt Mary next, but Jayde speaks up to say that they will do it. As Mary protest that it would take a day just to sanitize him, Jayde assures Mary that they can do it and even insist it will boost Central's reputation. She states she will call 'Crankboy', an industrial crew worker with a magnet lifter crane.

The exhausted crew work on McBain for hours, at one point Mary nicks his artery and shouts for band-aids and super glue. Still more hours later, Mary becomes so aggravated that she wants to amputate McBain's limbs while he sleeps, it takes a combination of Jayde and Genghis Lincoln‎‎ to hold her back. However, it is decided that they have to tie an exhausted and inchoate Mary to a chair to prevent her from carrying out her previous threat.

When McBain wakes up after the heavy session is complete, Kidd Chaos holds up the bill only for McBain (once again) head butt him. He then attempts to flee (Ink-n-Run) from the parlor, a frustrated Mary almost blames Jayde until the Crankboy arrives and McBain is hosted up by his pierced nipples. Later that night the Central crew tell Anna about the story which entertainers her, she is also seen with a female Urbz under her arm and states that her ideal Dream Punks are women. 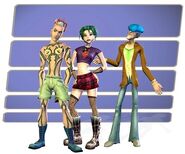 Will.i.am warning the player about Urangoo.

Diva Roma warning the player about Urangoo.
Add an image to this gallery

page 4
Add an image to this gallery
Retrieved from "https://sims.fandom.com/wiki/Urangoo_McBain?oldid=937861"
Community content is available under CC-BY-SA unless otherwise noted.