The Unsavory Charlatan ( /ʌnˈseɪvəri ˈʃɑrlətn/) is an NPC included with Bon Voyage. He appears on community lots both in and out of vacation destinations and often tries to pick Sims' pockets. His appearance is similar to that of a silent film villain, judging by the cape, top hat, waxed mustache and his Edwardian style suit. His method of stealing money is also very dramatic, simulating the old silent film villain or a con-man.

He can pick the pockets of virtually any Sim, including townies and other unplayable Sims. Players should be wary when he is around, as he may attempt to greet their Sims, and may make off with their money. Players should also pay close attention to any Sims wearing a top hat and monocle because that might be him, especially because his outfit changes with the theme of the vacation lot he's in (e.g. in Twikkii Island he wears tropical garbs). Sims with low logic skill levels will be more liable to his tricks, while Sims with higher logic might be able to ward off his plan. After he picks the pocket of a Sim, he may appear on the residential lot and any vacation homes that they own. His most common victim is the Tour Guide.

The Unsavory Charlatan seems to be in love with Mrs. Crumplebottom, and will attempt to serenade her if she is on the lot, to no avail. While he is serenading, Sims have a good chance of getting away from both of them.

On community lots, Sims cannot talk or interact with the Charlatan in any of the usual ways (strangely, when present on a University lot he shows up as an option for a student to "Ask for Tutoring," but the action does not actually work when selected). On Vacation lots, he can be asked for advice around the area. If a Sim finds out he has stolen money from them, they can be told to fight him by clicking on him and selecting "Fisticuffs!". However, if he wins, another §150 is stolen. Having a high body skill greatly reduces the chance of this happening and increases the chance of reclaiming the stolen money. Any Sim can report the theft, should it occur, by clicking on the telephone booth and selecting "Report Foul Play". This will keep the Unsavory Charlatan at bay for a few days, but he will come back eventually.

The Unsavory Charlatan also plays poker and he always wins, because he always gets a poker hand of Royal flush. He also plays pool and mahjong, meaning that he has distractions that may allow players to escape him, but unlike Mrs. Crumplebottom, who can remain distracted indefinitely, he is less likely to get distracted.

The Unsavory Charlatan is voiced by voice actor Stephen Kearin. His hat, monocle and outfit is available in Create-A-Sim debug mode. The Charlatan is generated once his NPC purpose is needed, unlike most other NPCs that exist before the start of the game.

Warning
Do NOT attempt to add the Unsavory Charlatan to a household, make him selectable, turn him into a supernatural creature, or tamper with his character data in any way or form. Doing so will corrupt the neighborhood he is in.

The Unsavory Charlatan in Takemizu Village

The Unsavory Charlatan in Three Lakes

The Unsavory Charlatan in Twikkii Island

The Unsavory Charlatan near the skating rink 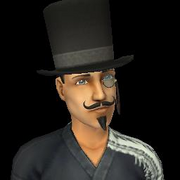 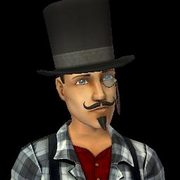 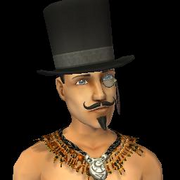 Twikkii Island Unsavory Charlatan
Add an image to this gallery
Retrieved from "https://sims.fandom.com/wiki/Unsavory_Charlatan?oldid=854668"
Community content is available under CC-BY-SA unless otherwise noted.