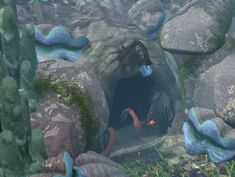 An underwater cave is a large cavern located at the bottom of the ocean in the diving areas of The Sims 3: Island Paradise. The underwater cave is one of the things a Sim can interact with while scuba diving. Sims can explore an underwater cave from 60 to 90 minutes, and while exploring the cave, there is a 45% to 95% chance of finding something, depending on the scuba diving skill. It could be some metal, a gem, a shell, a message in a bottle, a magic gnome, or a scuba magic gnome. When exploring, there is also a 35% chance of finding an air pocket inside the cave.

The underwater cave works as a portal in the diving areas of Isla Paradiso, and some of the portals can only be accessed if the Sim has sufficient scuba diving skill. Some portals will connect to another cave in the same diving area, while others may send Sims to a particular spot.

While diving, Sims might encounter sharks. They can hide inside caves, but never more than one. In addition, there is a chance the Sim might be attacked by an underwater monster when they exit the cave. The chance decreases with higher levels of scuba diving skill, from 25% down to 5%.

Sims can also WooHoo inside an underwater cave.

A Sim entering the cave
Add an image to this gallery
Retrieved from "https://sims.fandom.com/wiki/Underwater_cave?oldid=936887"
Community content is available under CC-BY-SA unless otherwise noted.