The Sims Wiki
Register
Don't have an account?
Sign In
Advertisement
in: Sims who have mastered a skill, Sims with mismatched sign, Sims,
and 20 more
English

Listen  /ˈtɪbəlt kæp/) is a pre-made teen Sim living in the Veronaville neighborhood. He is the grandson of Consort and Contessa Capp and son of the deceased Cordelia Capp and Caliban Capp. He has two sisters, Juliette and Hermia. His cousins are Miranda, Hal, Desdemona, and Ariel.

Tybalt is enemies with Romeo and Mercutio Monty, because of the Capp/Monty family feud. He has been involved in the feud since youth, as one of the Capp family storytelling images show him harassing Mercutio while Hermia daydreams and Romeo and Juliette play together. In addition to his participation in the feud, Tybalt has negative daily relationships with several members of his family - Ariel, Hal, Juliette, Kent and Miranda.

Tybalt attends private school, along with his sisters. He wouldn't have been able to get into private school with a C- grade. It can be assumed that he was enrolled in private school before his grade dropped. When first played, he is 5 days away from becoming an adult.

The birth order of Cordelia's children is not consistent. The memories of both Tybalt and his siblings display Tybalt being the youngest child. When their parents died, he was a toddler, Hermia was a child, and Juliette was a teenager. However, Consort's memories place Tybalt as the oldest of Cordelia's children; this is consistent with Tybalt being the actual oldest sibling in-game. Additionally, one of the story-telling images of the Capp family show Tybalt as a child watching his siblings in their respective cribs as toddlers.

Because of Tybalt's high body skill number, he will almost always win physical fights against Mercutio. Strangely, Tybalt doesn't have the memory of mastering the body skill. 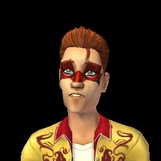