Ty Dee is a pre-made maid who resides in Twinbrook, the world introduced in The Sims 3: Ambitions. He has no relationships at the start of the game, since he has not yet been hired by anyone.

Ty has five traits, instead of the four traits that maids usually have (the fifth is the hidden "Makes no Messes" trait)[clarification needed]. This also happens with his fellow maid Anne T. Septik.

Ty can be made playable by befriending and asking him to move in, or by marrying him. His name is an obvious pun on "Tidy" since a maid's work is to tidy the houses of their employers. 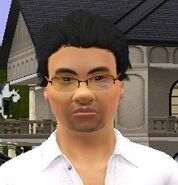 Ty Dee in-game.
Add an image to this gallery
Retrieved from "https://sims.fandom.com/wiki/Ty_Dee?oldid=898957"
Community content is available under CC-BY-SA unless otherwise noted.