Trinculo Arlecchino ( /ˈtrɪŋkjʊloʊ ɑrlɛkˈkiːnɵ/) is one of the pre-made, yet unplayable ancestral Sims that resided in Veronaville in The Sims 2. He was the son of Stephano and Quickley Arlecchino, the husband of Maria Arlecchino (née Amantes), the father of Hero Monty (née Arlecchino), and the grandfather of Beatrice, and Benedick Monty.

Trinculo's gravestone does not exist within Veronaville, so he can't be made playable without the use of hacks. As a result, the only indication of Trinculo's existence is provided by the family tree of his descendants. He died before Beatrice and Benedick were born.

Like most other Veronaville Sims who died young, he has a hidden elder thumbnail, although the reason for its existence is unknown. Also, the portrait pose in the hidden thumbnail was removed prior to release, as there are no playable Sims with this thumbnail angle.

Trinculo is a jester in Shakespeare's The Tempest. 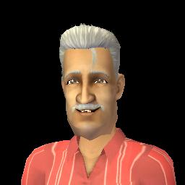 Retrieved from "https://sims.fandom.com/wiki/Trinculo_Arlecchino?oldid=905232"
Community content is available under CC-BY-SA unless otherwise noted.