Travis Scott is a pre-made Sim that appears in The Sims 4 who resides in the BFF household in Willow Creek. He resides with his roommates Liberty Lee and Summer Holiday. Despite their household name indicating that the three are very close, he is only acquaintances with Summer and Liberty.

Travis is a young adult, 23 days away from becoming an adult. He works in the tech guru career at level 2 (quality assurance). He has two skill points each in video gaming and programming, and has the Computer Whiz aspiration. His career, skills and aspiration fit the geeky stereotype.

He shares his name and appearance with Travis, a geeky and fun-loving character from the MySims series. The love triangle between him, Liberty and Summer is based on a scenario in MySims Kingdom. His career is also appropriate, as Travis's bio in the first MySims reveals that he was previously a company CEO and is constantly seeking out the latest technology.

Travis can be recognized by his maroon argyle sweater. He wears a pair of brown trousers and tan shoes, just like Travis in MySims, except for the sweater. With spiky blonde hair and a cleft chin, he can be more noticeable. 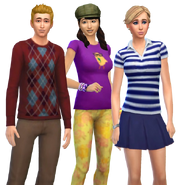 Travis with a player-made Sim

Travis as he appears in MySims
Add an image to this gallery
Retrieved from "https://sims.fandom.com/wiki/Travis_Scott?oldid=878953"
Community content is available under CC-BY-SA unless otherwise noted.