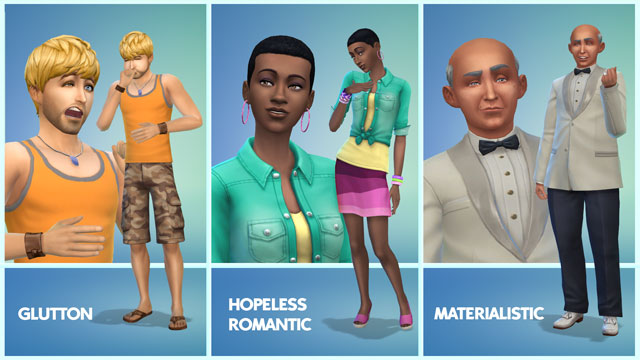 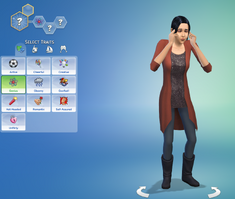 A Sim demonstrating the "Genius" trait

As Sims socialize with others, they may reveal their traits from certain interactions. For example, asking a Sim's career will reveal if they have the ambitious trait, or flirting with a Sim may reveal the romantic trait. The Observant reward trait allows a Sim to instantly learn the traits of other Sims.

Adult Sims created in Create a Sim may have up to three traits. Teens created may have up to 2 traits, children may only have 1 trait, and toddlers have 1 personality trait that is different from the other traits. All traits affect a Sim's behavior and emotions, for example, a creative Sim may randomly become inspired, while a Sim that loves outdoors will sink into a low mood if they stay inside too long.

The following lists all traits that appear in the game.

Toddlers can only have one of the following traits. Regular traits can be selected once the toddler Sim ages up to a child.

Each Sim receives a bonus trait upon choosing their initial aspiration that will aid them in fulfilling its goals. Bonus traits are retained even if the Sim's aspiration is later changed.[1]

Sims will receive a unique trait upon death that describes the manner of their passing and the abilities they have as a ghost. These traits can only be seen within the simology panel.

It is not possible for aliens to learn the Slinger of Spells, I am the Master, A True Master, Master Mixer, and Regained Humanity traits without the use of cheats, as they require vampire or spellcaster occult status, and aliens cannot change into those types.

These traits can only be earned by toddlers after increasing their skills.

These traits can only be earned when the Sim is a child and completes a child aspiration.

With The Sims 4: Parenthood, Sims with extremely positive or negative character values will earn the appropriate trait once they become young adults that correspond to the extremity of their character values.

Certain traits can be purchased with Satisfaction Points. Unlike regular traits, these traits are of narrow focus and usually only grant a single ability.

These traits are bestowed upon a Sim for a short time only before being removed.

Childhood phases in the The Sims 4: Parenthood are temporary traits randomly experienced only by child and teen Sims.

The Sims 4 features numerous traits that are never visible in the Simology panel. Many of them are used only for technical purposes, such as marking visited secret lots,[TS4:SD] completing first time actions, or to provide functionality for NPCs. Other trait types include:

The old icon of lazy trait

Mean trait used to be called mean-spirited, like in The Sims 3

Icon indicating spellcaster lifestate
Add an image to this gallery

Retrieved from "https://sims.fandom.com/wiki/Trait_(The_Sims_4)?oldid=907222"
Community content is available under CC-BY-SA unless otherwise noted.