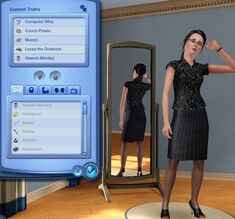 A Sim demonstrates the "Absent-Minded" Trait via posturing in the Create a Sim mode when the Trait is selected.

Traits are the building blocks of personality assigned to Sims in The Sims 3, replacing the previous system of personality points. Traits effectively determine a Sim's behaviors, abilities, and their wishes, including their array of Lifetime Wishes. There are 63 traits in the base game. Three were added with The Sims 3: World Adventures and there are six added with The Sims 3: Ambitions for a total of 72 traits and 11 hidden traits.

Each trait is separated into one of four categories based on mental, physical, social, or lifestyle aspects of Sims' lives. For example, social traits may include Dislikes Children or Friendly, while lifestyle traits would consist of Technophobe or Daredevil. Traits are used to allow Sims a greater complexity in their daily routines over the points system. The more traits a Sim has, the more complex they will be, as a Sim with more personality traits will exhibit a wider range of behaviors than a Sim with only one.

Sims can attain traits in multiple ways. Ordinarily the player will assign a maximum of five traits to a young adult or older Sim in the Create a Sim screen under the "Personality" section. Traits can also be inherited via genetics from either parents, with babies and toddlers having two Traits. If the toddler grows up well, the player will be able to choose a third Trait for when the Sim becomes a Child, and likewise a fourth when the Sim becomes a Teen (and so on). Furthermore, the Lifetime Reward "Midlife Crisis" allows the player to re-choose a Sim's traits.

There are limitations on the traits a Sim can have. Foremost, two traits may not contradict each other, such as the Good and Evil traits, or the Can't Stand Art and Artistic traits. Such traits are inherently built around opposing behaviors, and intrinsically preclude the occurrence of the other. In addition, Sims may be unable to obtain traits based on their age, one example being that babies are unable to have the Charismatic trait.

Traits also grant Sims different abilities, or specific actions which only Sims of those traits can do. Insane Sims are able to use the command "Talk to Self" to boost their own social motive, while Vegetarian Sims are able to cook vegetarian alternatives to meals containing meat. Some traits can grant Sims special moodlets, with Loner Sims enjoying their solitude or Hydrophobic Sims fearing swimming in the pool. Other traits allow Sims a greater affinity for certain tasks, such as Angler Sims being better adept at fishing while Genius Sims tend to learn more quickly. In this respect, the customization that players give to Sims via the trait system can make the game more or less challenging while offering a greater deal of specific variety which the more simplified point system found in the game's predecessors lacked.

Features comparable to traits in previous games in the series are Zodiac signs and interests.

Hidden traits cannot be seen in-game except when a Sim performs the related action. Unless mods are used, they can only be acquired through genetics. These traits become available when a Sim has a baby with certain NPCs or a Sim in a specific career. The child will then get the appropriate hidden trait.

Burglars must perfect their sneaking skills to properly liberate imprisoned items from the homes of neighbors. Burglars like to keep the skill in the family, so their children are able to sneak out like a pro at birth.

Police officers spend years learning how to best the most clever burglars. Luckily for their children, genetics helps them stop burglars without years of tedious training.

Children of high-ranking military officials know enough about the military's rules and regulations to snap off a smart salute when they want.

Fire Fighters are able to survive countless fires; not least because of their natural immunity to fire. It's a trait that they pass on to their children.

In Ambitions, Sims and children of Sims who reached the top of the Firefighter career will occasionally have this trait. [confirmation needed]

The descendants of maids have cleanliness imprinted on their genetic code so they never leave anything dirty.

Pizza delivery folks develop a love of pizza that's deeper than the thickest crust. Their children share a similar fanaticism for pizza, which makes every bite of hot pizza amazing.

You can only get this trait in a Sim who is the offspring of a firefighter Sim. The trait allows them to set fire to objects of their choice, and they get positive moodlets for doing so!

Sims with this trait will get a natural feeling of rockstardom.

Below are the traits that were removed before the game was released, possibly because they would have caused a higher ESRB rating, or were too similar to certain traits.

Retrieved from "https://sims.fandom.com/wiki/Trait_(The_Sims_3)?oldid=140983"
Community content is available under CC-BY-SA unless otherwise noted.