Training dummies are used by Sims to practice hand-to-hand combat in The Sims 3: World Adventures and The Sims 4: StrangerVille.

The Sheng Hai Training Dummy is a skill object introduced in the World Adventures expansion pack for The Sims 3.

The Training Dummy is the primary skill object for obtaining the martial arts skill, the secondary one being the Board Breaker. These can only be bought from a merchant at the market in Shang Simla. Sims can access these objects without buying them through the Phoenix Academy in Shang Simla.

The animation of the Sim training with the dummy depends on the skill of the active trainee: if the trainee is new, the Sim will "slap" the dummy, sometimes ending up hurting themselves (although no moodlets or motive changes occur from such accidents), while a Sim who is somewhat acquainted with the art will either land a slow three consecutive kicks or a set of fast jabs. A really skilled sim (skill level 7 and above) may launch double-legged kicks and uppercuts.

Sims can either spar alone, or take turns sparring while other Sims watch. Sparring together will raise friendly relationships. 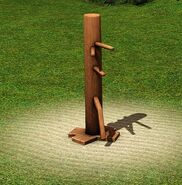 The Sheng Hai Training Dummy in action.
Add an image to this gallery
Retrieved from "https://sims.fandom.com/wiki/Training_dummy?oldid=890281"
Community content is available under CC-BY-SA unless otherwise noted.