Torin Namaste is a Sim that appears in The Sims 2 (console). He lives with his two roommates, Farah Moonbiscuit and Timmy Tool.

Torin is first introduced at Shoreline Trails. He is a mean and nasty Sim, according to the description of the Gold want "Become Enemies with Torin".

He is also considered a level boss in the game as he must be beaten at Foosball in order to move on. In order to beat him, the player must purchase the Tournament Foosball Table and then select 'Practice Foosball'. Once that is done, call over Torin to challenge him. The player wins depending on the Body Skill of their Sim. If they do win, the player unlocks Cliffside Retreat.

Once your Sim gets the want "Become Enemies with Torin", it will be hard for him to accept an apology after becoming enemies with him. Torin has a -40 relationship with Timmy at the start of the game while he has a +20 relationship with Farah. Torin is unplayable unless you become lovers or best friends. From there, you must get married or ask him to move in with you at another location.

Render from The Sims 2 Prima Guide 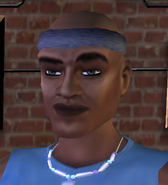 In-Game Icon
Add an image to this gallery
Retrieved from "https://sims.fandom.com/wiki/Torin_Namaste?oldid=923000"
Community content is available under CC-BY-SA unless otherwise noted.