Torgo Pendragon is a pre-made pizza delivery man from Sunset Valley. He doesn't have any skills and relationships at the start of the game. He can be made playable by marrying him, or asking him to move in. He has only one trait and one hidden trait. His female counterpart is Autumn Cusack.

His surname could be a reference to the Pendragon Gate door in the original The Sims game. His first name is also a reference to the film "Manos: The Hands of Fate" which was famously featured on Mystery Science Theater 3000. Pendragon's role as a pizza delivery man is also a nod to MST3K, where Torgo delivers a pizza to the Mads at the end of the episode. 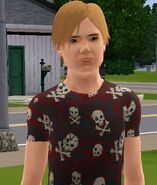 Torgo's outfits
Add an image to this gallery
Retrieved from "https://sims.fandom.com/wiki/Torgo_Pendragon?oldid=899622"
Community content is available under CC-BY-SA unless otherwise noted.