The Sims Wiki
Register
Don't have an account?
Sign In
Advertisement
in: Cheats, Objects that change Simology, The Sims 2
English

Tombstone of Life and Death

Tombstone of Life and Death 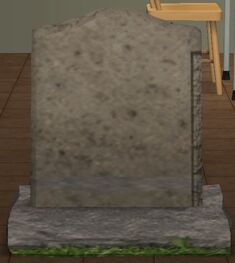 The Tombstone of Life and Death

The Tombstone of Life and Death is a debugging object in The Sims 2 that can be spawned with the testingcheatsenabled cheat. Like its name suggests, it takes the form of a tombstone when spawned.

The Tombstone has a variety of purposes, including killing the active Sim (either by flies or by old age, if the active Sim is old enough), speeding up the aging process, making them friendly with all Sims present on the lot, impregnating the active Sim with any Sim on the lot (including NPCs such as the Grim Reaper and themselves) or with an alien baby (the latter also works on female Sims) or spawn a randomized Sim of any age. It also allows the player to add any Sims in the current neighborhood to the house, including dead Sims, NPCs and Pets.

Impregnate a Sim
With an adult Sim of either gender selected, click the tombstone, select "Simulate genetic merger with", then the player will be required to choose the second parent, who may be of any age or gender, from the menu. Any Sim who is present on the lot can be chosen, including the same Sim or a Sim of the same gender. If the same Sim is chosen, the baby will inherit only their genetics, but will always be the 'opposite sex'.

Impregnate a Sim with the Grim Reaper

Impregnate a Sim with an alien
With an adult Sim of either gender selected, click the tombstone and select "Make me alien pregnant". The other parent of the Sim's baby will be the alien Pollination Technician.

Recover Sim that disappeared when using testingcheatsenabled
Select 'Get Family Member' and click on the name of the missing Sim.

Once the Sim is selectable there are two options:

Whilst several NPCs can be added to the family via the Tombstone, most of them have the potential to corrupt the neighborhood or the game if added onto the lot, killed off or deleted. A few of them only appear for a few seconds when added to the household.

Sims that are known to cause problems if added to a household include:

There are three Sims who appear in the list and yet are not technically Sims. These are NPC: Remote Controlled Car, NPC: Bird and NPC: Robot. All three of them appear as female Sims in the adult life stage with no face and long black hair wearing red long-sleeved tops and white jeans. NPCs that usually appear if the active Sims aspiration meter is in the red, such as the Therapist, will be invisible unless the active Sim has a red aspiration meter.

A longer list of Sims that should not be added to the household is available here.

Sims added to the household that have aged on another lot will have their ages reset to 0, as if they had just transitioned into their current age - i.e., if Angela Pleasant is 10 Sim days away from being an adult and she is added to the Goth household, her progress would be reset back to 15.

Trying to add a dead Sim to a lot via the Tombstone of L and D will give a message saying, "[Name] has died on another lot. [Name] will appear as a spirit in the place of [Name]'s death", and the Sim will disappear from the lot. However, pausing the game gives the player time to make the Sim selectable. Additionally, accessing the Grim Reaper and Hula Zombies is similar to accessing dead Sims, as the Grim Reaper will look around before disappearing and the Hula Zombies will start dancing and disappear.

Nanny alternative
This can be very useful if there are babies, toddlers or children living in a single-parent home. Rather than hiring a Nanny, an elder or adult can be spawned from the tombstone and watch the child(ren) while the parent is at work. They can also cook, clean, and perform other everyday domestic tasks.